Kanye West Wants To Start His Own Church – But What Will It Be Named? 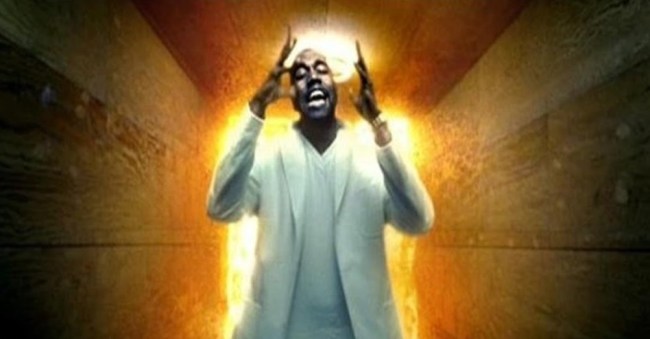 In not surprising news of the day, Kanye West is seriously considering starting his own church. Anyone who has known anything about Kanye West in recent years should definitely not be shocked by this development.

You may recall that the Jesus Walks rapper held a live-streamed “Sunday Service” at Coachella this month with the help of DMX, Teyana Taylor, Kid Cudi, Chance the Rapper and Ty Dolla $ign. Kanye’s religious performance on Easter drew morning crowds of over 50,000, which is quite something.

Kanye was also selling “Church Clothes” with sweatshirts for $225 and “Church Socks” for $50 at Coachella. Hey, churches are tax-free but expensive to start up.

Sources allegedly told People that Kanye West is now seriously thinking about starting his own church. “He is extremely passionate about his faith and wants to share it more regularly with people,” a source close to Ye said. “He spends a lot of time studying and praying, and wants to share his journey.”

“Say what you want about Kanye, but he really does want to help people who need support,” the source adds. “He understands brokenness and the need for healing, probably more than most people. He believes in the healing powers of music, but also believes that God can step in and heal people’s brokenness and their issues.”

The 41-year-old rapper has allegedly been delivering weekly Sunday Service weekly since the beginning of the year for friends and family. Now he wants to bring his religious message to the masses. But what will the name of Kanye’s church be? The Church of Jesus Christ of Latter-Ye Saints? The First Church of Narcissism? United Church of Yeezus Khrist? Kanye Westboro Baptist Church?

“Kanye has always said that his vision has always been for people from different backgrounds—races, ethnicities, beliefs, politics—to come together to worship God and love other people,” the source says. Plus no taxes is a great benefit. Starting their own churches worked out pretty great for L. Ron Hubbard, Jim Jones and Charles Manson (at least for a little while).

Kardashian appeared on Jimmy Kimmel Live and explained that Kanye’s Sunday Service is a Christian musical “healing experience” that is “pretty moving,” but isn’t preachy and there are no sermons (10:30-mark).

The source added that as of right now there are “no official plans,” but the Church of Kanye is something he is seriously considering.

Is should be noted that there is already the Church of Yeezus that practices Yeezianity the religion that says Kanye is God and is “the highest living human being and he will help to usher in a New Age of humanity.”

There are five pillars of Yeezianity:

1. All things created must be for the good of All
2. No human being’s right to express themselves must ever be repressed
3. Money is unnecessary except as a means of exchange
4. Man possesses the power to create everything he wants and needs
5. All human suffering exists to stimulate the creative powers of Man

Could a Kanye West gospel album soon follow? Or will Ye’s next album be titled The Sunday School Dropout? Would you join Kanye’s congregation? Whatever you do, don’t drink the Kool-Aid there.