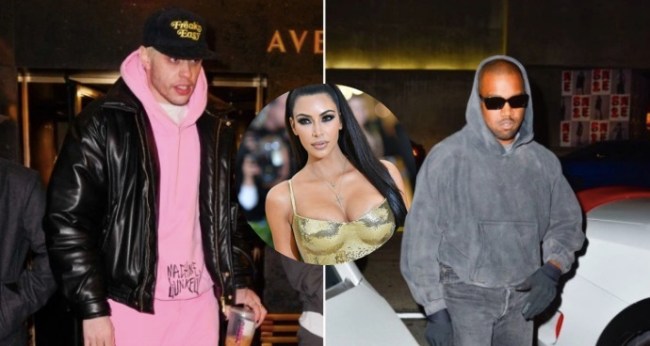 Over the weekend, the final nail in true love’s coffin was hammered into place as news broke that Kim Kardashian and Pete Davidson had decided to end their fairytale-like relationship after about eight months of dating.

Naturally — never one to let an opportunity for publicity pass him by — Kanye West hopped on his beloved Instagram account to take yet another shot at Davidson.

Clearly responding to the news that the once-happy couple had decided to go their separate ways, Kanye posted a fake front page of The New York Times that declares “Skete Davidson” has died at the age of 28 years old.

Not only did Kanye’s IG post take a shot at Davidson, but it also snuck in a subtle jab at Kid Cudi, too:

Kanye West gives us the morning news by trolling the Pete Davidson and Kim Kardashian break up while taking a shot at Kid Cudi. pic.twitter.com/mzvVYw7cPe

The fake NYT front page is just the latest shot that West has taken at Davidson over the last year or so, as the 45-year-old father-of-four clearly did not approve of him dating his ex-wife. West’s treatment of Davidson wasn’t just limited to Instagram posts, though, as the rapper also made threatening references to Davidson in some of his recent songs. Davidson, to his credit, never seemed to be all that bothered by West’s increasingly hostile behavior and never took the bait to engage in the beef, either.

Now that Kanye knows Kim is technically single again, it’ll be interesting to see what type of borderline harassment method he deploys in an effort to win her back. Because you know he will.