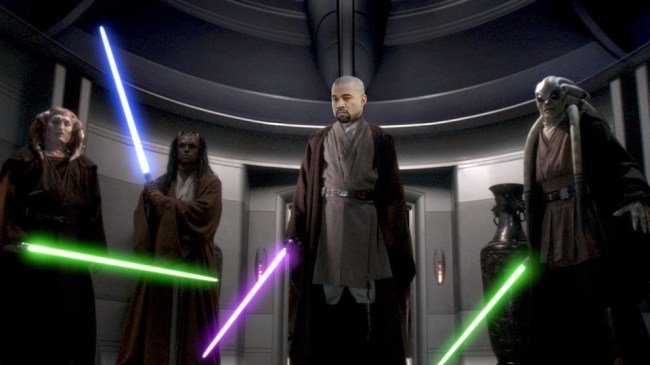 Is today a day that ends in “Y”? Ah, it is? Well then, that means Kanye West must’ve said something stupid, as he does every other day that ends in “Y”. This time, his machine-guy-spray of nonsense crossed into my domain, as the former rapper and current social media star decided to speak on the Star Wars films, particularly how he believes the sequels are worse than the prequels.

“And this is about to make me mad, right here,” said on the podcast. “The first time you’ve seen me get made in an interview. They said George Lucas’ prequels were worse than the corporate-made Disney Star Wars. Like Revenge of the Sith? We saw how Darth Vader was made! Like I watched that 10 times during COVID. ‘Don’t jump Anakin, I’ve got the high ground!'”

“I’m saying the prequels are better than anything…and I’m sorry Disney/Star Wars design team…no man, this is George. This is his baby. That thing was set in his heart to show us as children to show us The Hero’s Journey.” [via The Joe Rogan Experience]

Now, I will agree with Kanye West in one sense: Revenge of the Sith is, actually, better than it gets credit for and is nowhere near as abject as The Phantom Menace and Attack of the Clones. Fine, I’ll give him that. But still, Episode 1 and Episode 2 are so dour, so clunky, and frankly so boring that there’s simply no way they’re *anything but* the worst films in the franchise.

Say what you will about The Force Awakens simply being a retread of A New Hope, at least it’s entertaining. Then, there’s The Last Jedi, which is — in my opinion — the best film among the prequels and sequels. Sure, The Rise of Skywalker was a monstrous disaster, but even still, it’s nowhere near as truly awful as Attack of the Clones. Kanye is trying to act like a pseudo-intellectual by claiming Disney’s consumerism killed Star Wars when it was really George Lucas’ obsession with meandering politics and tax code that paved the way for the sale of Lucasfilm to the Mouse House to begin win. People seem to forget how truly devastating Episodes 1 and 2 were to the franchise — it caused some to wonder whether the success of the original trilogy was just blind luck.