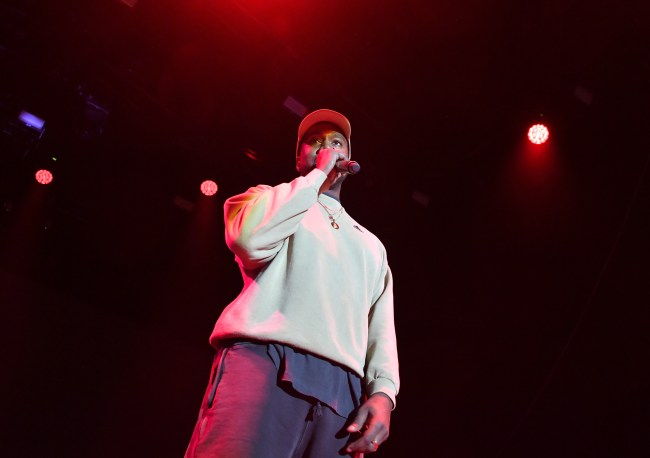 Kanye West held a listening party for his new/forthcoming album last night. The party was held in Jackson, Wyoming, one of the more remote *towns* in America with a population of just over 10,000. Celebrities, rappers, music industry insiders, influencers, and anyone else who had access to a private jet and wanted to get there showed up in Wyoming for the bizarre Kanye West album listening party which was set to a backdrop of awe-inspiring mountains.

Kanye’s been acting crazy as hell lately. With weeks of ranting on Twitter about everything under the sun. His creative juices were obviously flowing at full-speed but you started to wonder if something was wrong with his mental state. Based on the reactions to his new album from people who were at the streaming party, it sounds like everything’s perfect in Kanye land.

This #Wyoming album is great! So much better than Pablo. Glad Kanye was trolling with that poopedy scoop stuff. Back in old school form.

This album sounds like Yeezus had a baby with College Dropout but cheated with Life of Pablo and was adopted by Graduation. #YE

This album is already a piece of art.. Kanye always finds a way to outdo himself when you think there is nothing left to do. Always. #YE

Kanye had the tracklist to #YE on his shirt. #WYOMING 🔥🔥🔥⛰⛰⛰ pic.twitter.com/XfVWjkWvW9

Not everybody is buying the hype, though:

Bruh, these Kanye bars are all types of cringe. And he swore these rhymes were that business. If you flew to Wyoming for 7 tracks of mediocrity…oof. pic.twitter.com/OoSg038IqM

One listen Kanye review:
The beats are cool.
Lyrically, you're not getting anything crazy insightful. Meh
I need more Kid Cudi in 2018
WTF was that Nicki Minaj voicemail?#Ye

By the way, this is where it all took place:

#wyoming setup for Kanye's album is insane! Speakers in the field. pic.twitter.com/UMNhc9LKTr

You can preview the album here.

There were also a ton of tweets yesterday of people hopping on their PJs and landing at private airports in Wyoming for this listening party. If you are the type of person who is willing to hop on a private jet and fly to Wyoming for a Kanye West album listening party then do you really care what the album sounds like? Sure, on some level you do, but you’re there to be rubbing elbows with celebrities and feel like you are part of something special. It’s not about the album, it’s about access to people you’d normally never have access to. Those last two tweets hating on people flying to Wyoming? Those people would sell their right legs to have been there.