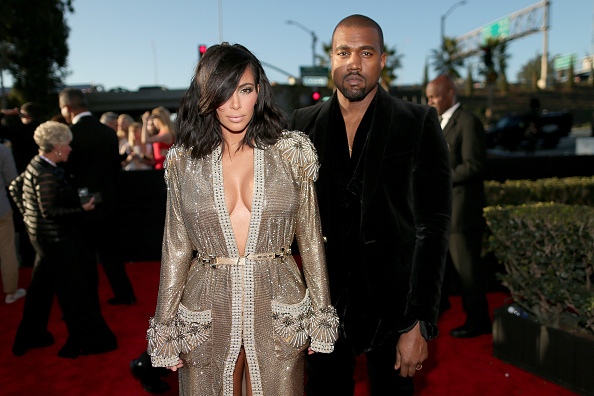 On Saturday, 2 Chainz and Kesha Ward got married at the Versace Mansion in Miami, but instead of focusing on the blessed newlyweds, everyone was focused on Kanye West and his Yeezy slides that were two sizes too small.

Kanye and Kim Kardashian were one of the big attractions when they arrived at the nuptials of Mr. and Mrs. 2 Chainz.

Kim wore a highlighter green latex dress and Kanye wore a wrinkly green Louis Vuitton suit with no undershirt to expose his chest. With Yeezy slides. And socks. Because fashion.

A post shared by 2 Chainz Aka Tity Boi (@2chainz)

The internet quickly noticed that Kanye’s slides were a smidge too small and his heels were hanging off the shoes.

Is everybody just gonna disregard the fact that Kanye is wearing too small of slides? pic.twitter.com/ZP6Xb7TrAu

The internet wasn’t about to let Kanye slide with his small orthopedic shower shoes.

If anybody showed up to my wedding in slides and no shirt, security will kindly escort you out the door. Kanye Lost his mind

Maybe Kanye is working with Mugatu on a new fashion line, a way of life inspired by the very grumpy, prune-eating old geezers that make nursing homes so wonderful. The new line could be called “Geriatric.”

At $150 for slides, you should be able to fit your entire feet in them.

There were some people who defended Kanye and his tiny slides.

Some even theorized that Kanye was playing 4D chess and it was a clever marketing strategy.

Say what you want, but he's a smart guy. Now people are talking about his shoes (Yeezy Slides) that he recently introduced, but I bet they wouldn't be if he wore the correct size. pic.twitter.com/3O4mH67j2F

If we’re being honest, I want to wear slides to every wedding from now on. A few days earlier, Kanye showed that the Yeezy slides are great water shoes and not just orthopedic sandals to wear with a suit at a wedding. Versatility.

Also, why was Lil Wayne a busboy at 2 Chainz’s wedding?

A post shared by 2 Chainz Aka Tity Boi (@2chainz)

Anyway, congratulations to the newlyweds!

RELATED: Kanye West Invited To Direct His Own Naughty Movie