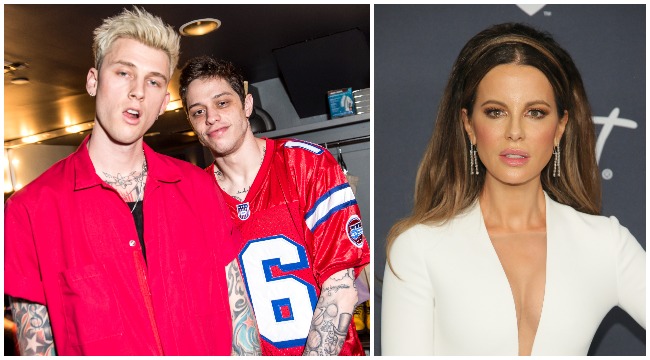 At the time of this writing, Pete Davidson is probably stacking colorful blocks or watching toy unboxing YouTube videos with his 18-year-old girlfriend, Kaia Gerber, who is young enough to believe that Y2K is a music festival and Surge is a dating app for influencers.

To each his own, but I was sitting next to a 22-year-old on a flight last week and the only thing we shared in common was the arm rest and a Xanax.

While Davidson and his girlfriend are baking with an Easy Bake Oven, Davidson’s best friend, Machine Gun Kelly, appears to be reheating his leftovers.

Seemingly turning flirting into a Golden Globes tradition, Beckinsale was spotted leaving a party after this year’s show with the 29-year-old tattooed rapper, whose real name is Colson Baker, according to photos exclusively obtained by Page Six.

The duo was photographed leaving Chateau Marmont in the same car early Monday following a night of festivities.

Let’s not forget that exactly one year ago, the 46-year-old Beckinsale and Davidson began their months-long fling after flirting at a Golden Globes party.

I’m here to speculate (yes I am), or draw from baseless stereotypes (also a lie), but Machine Gun Kelly looks like the kind of guy who would try to finger your sister on your parents bed during your birthday party.

“You deserve all the flowers in the world, but unfortunately I was only able to pick the ones from your parents’ garden.”

Who the hell am I kidding? Can we really blame the dude?

A lot easier to judge MGK while sitting on my couch with Papa John’s garlic sauce in my belly button.