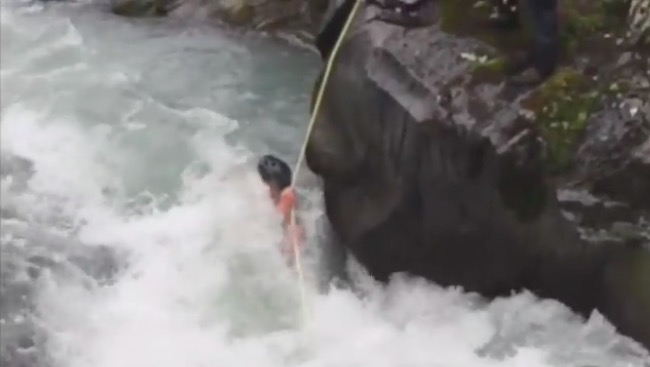 Daniel Hartung was on his first ever kayaking trip, paddling the Six-Mile Creek near Hope, Alaska. The rushing rapids were too much for Hartung and he was thrown from his kayak and sucked down the river. When Daniel made it to a rapid with other kayakers on the river bed the bystanders tried to rescue him by tossing Daniel a rope.

The harder Daniel pulled the more he was sucked underwater. He must’ve missed the lecture white water rapid safety that says you cannot fight the river and a good approach is to curl up into a ball and let the rapid shoot you out because the water continued to suck Hartung under.

Looking on from the river bed was Obadiah Jenkins, a man celebrating his birthday. Obadiah told his friends ‘nobody dies on my birthday’ before jumping into the water and forcibly kicking Daniel Hartung out of the water. By this time, Hartung has already gone unconscious but was resuscitated shortly after being rescued by Obadiah.

“I just knew at that point there was no way I could let this man die,” Jenkins said. “If I had 1 percent chance of saving his life, I was gonna try it.”
Rescuers performed CPR to revive Hartung. Jenkins, who had turned 33 that day, said there was no better present than seeing Hartung live.
“I remember, first time he opened his eyes, that I could tell he was breathing on his own, I said to him, ‘Nobody dies on my birthday,'” Jenkins said. “I could tell I got a little rise out of him because his eyes went to the side a little bit like, ‘Yeah, OK.'” (via)

Pretty wild stuff. And made respect goes out to Obadiah Jenkins for jumping into action and saving a stranger’s life by putting his own safety on the line.