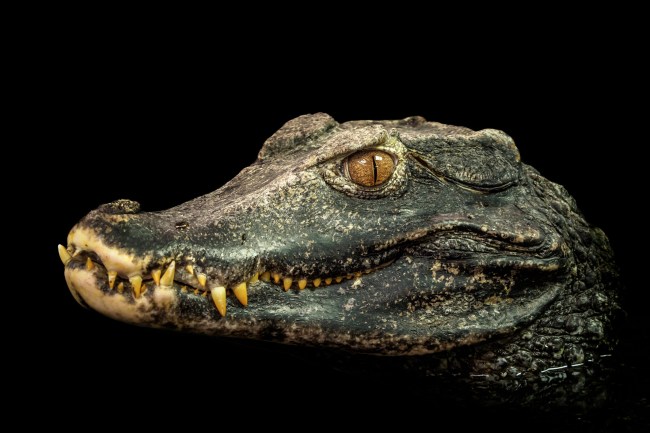 Growing up in Florida, seeing alligators was just a part of everyday life. Seeing an alligator swimming in Lake Michigan? That is NOT normal.

I moved back to Florida a few years ago and wasn’t the least bit surprised to find an 8-foot alligator living in the pond across the street. The golf club a few blocks away is named after alligators. Fishing in The Florida Everglades a few weeks ago I saw two HUGE gators slip off a barrier island into the dark brown saltwater and disappear. And just a few days ago I saw some Gator Jerky being sold at the gas station.

Seeing alligators is a normal occurrence throughout Florida, and parts of Alabama, Mississippi, Louisiana, West Texas, Georgia, South Carolina, North Carolina, and even the southern tip of Arkansas. But if you’re a kayaker paddling around Lake Michigan and see a 4-foot alligator swimming around you might begin to sh*t bricks because that is NOT a normal sight.

The gator found in Lake Michigan was actually a Caiman, which is an ‘alligatorid crocodilian’ but not the American Alligator you know from seeing throughout The South. Caimans are found throughout Central and South America, definitely not in the Great Lakes. I’ve only ever seen them in Panama and Costa Rica.

The kayaker captured footage of the swimming caiman in Lake Michigan just off the Waukegan Harbor. Without the footage, there was no guarantee that anyone would’ve believed them when they said they spotted an alligator swimming in Lake Michigan.

Waukegan Animal Control took the caiman alligator found by a kayaker in Lake Michigan to the Wildlife Discovery Center in Lake Forest pic.twitter.com/XYw3uw0vuN

I live across the street from an exotic animal rescue center that doubles as a zoo so they can pay the bills and keep the animals fed. I’m not shocked at all to see that someone would’ve released an exotic animal in the wild because I legitimately wake up to African lions roaring, lions that were donated by people who thought it’d be cool to own a lion and then woke up one day and realized ‘holy shit, I can’t take care of this lion.’

Police have found alligators living pretty much everywhere in America. I remember there was some dude in Harlem (NYC) that was found to have a large gator living in his apartment like a decade ago. So there’s no doubt in my mind that this was a pet. It’s just unclear if it was released by some dumbass or it got loose because some dumbass couldn’t keep track of his/her pets.