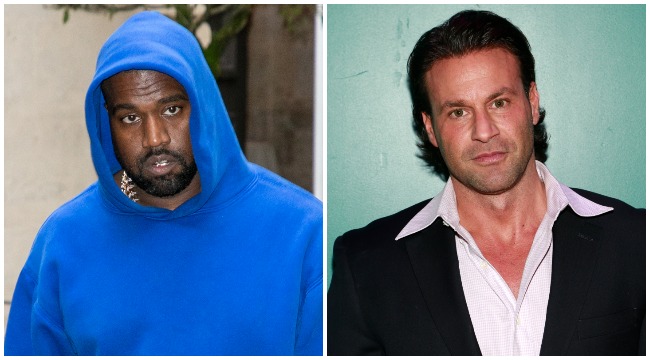 In 2016, Steve Stanulis worked as Kayne West’s bodyguard for a grand total of 15 days, which is evidently enough time to learn that you hate each other’s guts.

Stanulis’ tumultuous tenure as Ye’s bodyguard ended abruptly when he was allegedly fired after Kayne accused him of hitting on Kim Kardashian at the front door of their presidential suite at Waldorf Astoria Hotel in New York the night before the Met Gala.

Stanulis, a former Chippendale’s dancer and NYPD officer, claimed that he was simply talking to her about a potential change of plans ahead of the event.

Fast forward to the present and Stanulis still craves that smoke.

During a recent appearance on the Hollywood Raw podcast, Stanulis, who worked for stars like Leonardo DiCaprio, Woody Harrelson and Robert Downey Jr., claimed Kanye was one of his “least favorite people” to work for, no thanks to the “ridiculous rules” Yeezy implemented.

“He wanted you to stay 10 paces behind him on a city street,” Stanulis claimed. “So obviously if someone is going to come up and do something, by the time I try to run up and prevent it, it would have already happened.”

Steve’s first interaction with the legendary producer occurred during fashion week, with West immediately “ranting and raving” at him on his first day for not knowing which floor he was meant to be going to in an elevator.

“I said ‘look bro, we can do this one of three ways. One, you could tell me what button to press, and now I’ll know. Two, you could press the button, and I’ll see which one you press so I’ll know. Or three, you can sit in here all day and tell me how important your time is and we are not going to go anywhere,’” he recalled.

“Again, that was our first interaction. He went for the first option.”

Stanulis also speculated that Kayne and Kim tip off the paparazzi of their whereabouts to enhance their image.

“First of all, there’s no way [paparazzi] doesn’t get called upfront,” he said. “There’s no way every time they are leaving, all these people know about it. There’s definitely somebody calling ahead. That’s just my opinion…I’m just saying it coincidental that wherever we are, they’re always there. Maybe they’re just better than I think they are.”

Steve called Kayne the neediest, moodiest and worst tipper he’s worked with, he also said he was the most hardworking.