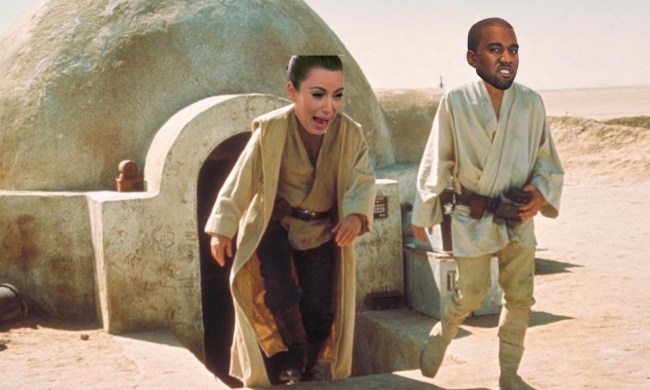 Over the course of the last decade or so, Kanye West has become more of an enigmatic entity than an actual musical artist.

Whether it be his seemingly manufactured marriage with Kim Kardashian (stay woke on this one, the Illuminati forced Kim K to dump Kris Humphries and marry Kanye West instead), his obsession with earth-tone apparel, or his ventures into gospel, you’d be well within your rights to forget that Kanye West used to be one of the best rappers on Earth.

These days, though, he spends most of his time moonlighting as a fashion designer, pretending to be educated on mental health, and… building low-income homes that resemble Luke Skywalker’s home on Tatooine in Star Wars: A New Hope? Well, alrighty then.

According to a recent feature in Forbes, one of Kanye’s latest ventures has been establishing low-income housing units. And while that certainly is a noble a respectable cause, the story takes a turn into classic Kanye West crazy town when it’s revealed that the homes are being designed to look like Luke Skywalker’s clay shack on Tatooine.

Inspired by Luke Skywalker’s childhood home, West has been working with a team to design prefabricated structures that sport the same austere aesthetic, with the goal of deploying them as low-income housing units.

Just after midnight he ushers me into his Lamborghini for an impromptu visit, barreling back down the road with Bach blasting on the sound system. After about 15 minutes, we arrive at a bungalow in the woods.

There, with the hazy heft of something enormous and far away, stand a trio of structures that look like the skeletons of wooden spaceships. They’re the physical prototypes of his concept, each oblong and dozens of feet tall, and West leads me inside each one. [Forbes]

Not much else is known about Kanye’s Tatooine project at this time, though, so don’t go holding your breath or you’ll end up like all of those fans who are still waiting on Yandhi.