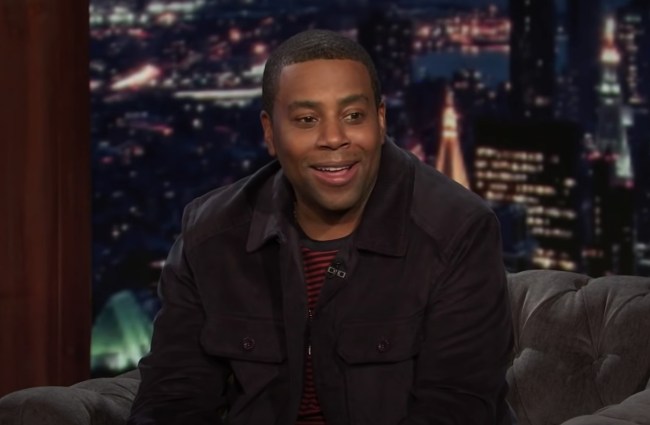 Kenan Thompson is coming up on two decades of tenure at Saturday Night Live. The dude has been on SNL since 2003! He’s been famous for pretty much my entire life and it all seems to run together at this point but my tiny brain cannot even comprehend the number of incredible stories he’s accumulated over the years.

As a guest this week on The Tonight Show Starring Jimmy Fallon, Kenan Thompson discussed how insanely talented Dave Chappelle is which is timely because Dave’s the host of this week’s Saturday Night Live. Jimmy took out a photograph of Kenan, Dave Chappelle, Chris Rock, Eddie Murphy, and Tracy Morgan to ask Kenan about it and that’s where Kenan shifted the conversation to Tracy Morgan.

The way Kenan tells it, Tracy was the first star at SNL to take Kenan under his wing. Their careers overlapped briefly. And by ‘taking him under his wing’ Kenan says that Tracy took him to TGI Friday’s in Times Square, an absolute hell hole, and he drove them there even though it was a block away. The story’s great and it comes just after the 5-minute mark in this clip so you can jump ahead to that point if you don’t want to watch the full interview.

Something that kind of blows my mind, given that Kenan Thompson’s been a celebrity for as long as I can remember (since D2: The Mighty Ducks), his estimated net worth online is only $12 million. I’d expect him to be raking in the cash by now with how long he’s been an active celebrity. He’s been on SNL for 17 straight years!

Kenan’s upcoming credits on IMDB include an appearance in the Home Alone (2020) for Disney+, Clifford the Big Red Dog, and a few others. He had an appearance in Adam Sandler’s recent Hubie Halloween.