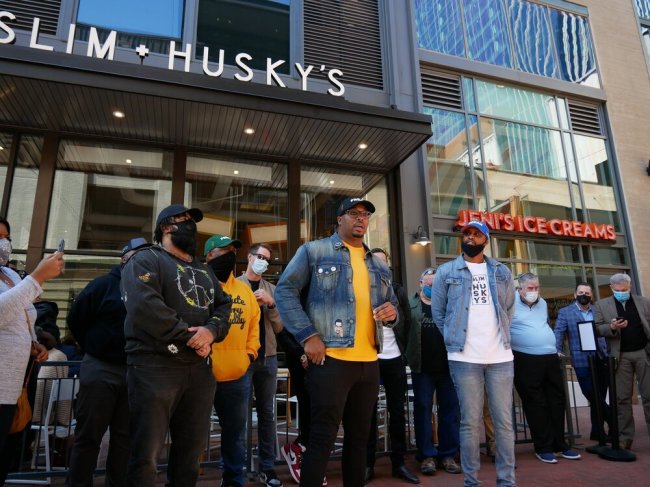 Slim & Husky’s Pizza Beeria made history on Thursday, becoming the first black-owned restaurant on Broadway in Nashville. The restaurant, which serves the best artisan pizza in the South, celebrated its grand opening on the city’s most famous, historically-relevant street and broke a big barrier in the community.

For a city that continues to grow and expand in both a physical sense and a societal sense, this is a huge deal. Slim & Husky’s was founded in 2017 in an area of Nashville that is away from the tourism, shopping centers and significant consumer traffic. There was a lot of negativity surrounding its ability to succeed, but where people saw disparity, owners Clint Gray, Derrick Moore and E.J. Reed saw hope. They now have multiple locations in the Nashville area, Memphis, Atlanta and Sacramento.

“It is important for tourists from all over the world to know about Nashville culture as a whole, and not just what is marketed to the masses,” Gray said. “Slim & Husky’s at Fifth + Broadway is a testament to that hope and a landmark that represents change.”

When the trio opened their first location, they had the community in mind. Locally-owned minority firms helped with the restaurant’s architecture and interior design, along with similarly-focused construction and furniture companies. Along with their award-winning pizza with locally-sourced ingredients, cinnamon rolls and local beers on-tap, live performances from local talents and Tennessee artwork are at the forefront of the experience. It’s by the people, for the people and their pizza is killer.

A post shared by Slim and Husky's Pizza Beeria (@slimandhuskys)

When Nashville announced that the city was building a new 200,000-square-foot space for retail, dining, & entertainment, Titans safety Kenny Vaccaro joined forces with Gray, Moore and Reed to open their new, history-making location. Vaccaro, who has been a staple on the team’s defense since 2018, was very outspoken throughout the summer about social injustice, racism and systematic oppression.

“Getting into communities, being a shining light, an example, not just a hashtag, not just a black square that everybody in the world posted on Instagram, and thought that meant something,” he said about influencing change in August. “Not making this a movement but making it a lifestyle.”

Back in September, Vaccaro said that he wanted to take more action in the Nashville community to spark change in the midst of the country’s growing social injustice issues. His commitment to community and young entrepreneur spirit makes him a great fit as a new member of the Slim + Husky’s team that made history on Thursday.

“We are excited to be included on a street we grew up frequenting and enjoying with friends,” Gray said. “The addition of Slim & Husky’s to the Broadway strip represents the power of inclusion and what we hope is a steppingstone to providing other minorities within the hospitality industry an opportunity to thrive in our city’s most popular entertainment district.”

Slim & Husky’s opening on Broadway is a huge deal for a city that continues to progress. You should check them out the next time you’re in Music City. I grew up outside of New York, so my standard for pizza is high, and S&Hs is the best artisan pizza I’ve ever had.

While you’re here, let’s take a moment to remember what an animal Vaccaro was at Texas.