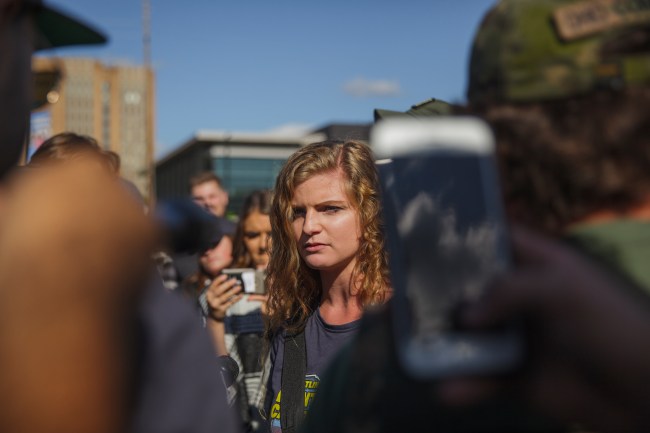 Controversial Kent State gun girl Kaitlin Bennett made a surprise appearance at Ohio University on Monday and things did not go well for her as she got run off campus by hundreds of protesters who were not happy with her presence.

Bennett dropped by OU on Presidents Day to film a video asking students trivia questions about the holiday, but was immediately heckled by protesters who were demanding that she leave the campus. Additionally, others began throwing rolls of toilet paper at her in reference to a rumor suggesting that she once shit herself at a party while in college.

here’s a montage of tik toks i saw of kaitlin bennett getting bullied at OU as she should pic.twitter.com/rENm9wfgXQ

As Bennett tried to leave the campus, OU students began throwing water at her pickup truck:

Sorry that I'm so loud but I was happy to see us students come together for an important cause, telling Kaitlin Bennett to leave OU pic.twitter.com/EpAO52fJs8

This is what happens when a Trump supporter goes to a college campus. Leftists at @ohiou started a riot when @Joelpatrick1776 and I showed up, and the @oupolice let it happen. I think @realDonaldTrump should strip funding from universities like this that harbor terrorists. pic.twitter.com/5TMlfdto9O

Ohio University Police said in a statement that they were caught off guard by Bennett’s surprise appearance, however, they rejected her claims that the crowd was at “riot” level.

Please see the attached statement regarding a protest incident today on the @ohiou Athens campus. pic.twitter.com/NigbKBf077

Bennett vowed to return to Ohio University with an “army of gun owners” for an open-carry walk through the campus.

I will absolutely be returning to @ohiou's campus again, and next time I'll bring an army of gun owners for an open carry walk through campus. You can't keep us away and you can't keep us silent. Just like Donald Trump, we will always win.