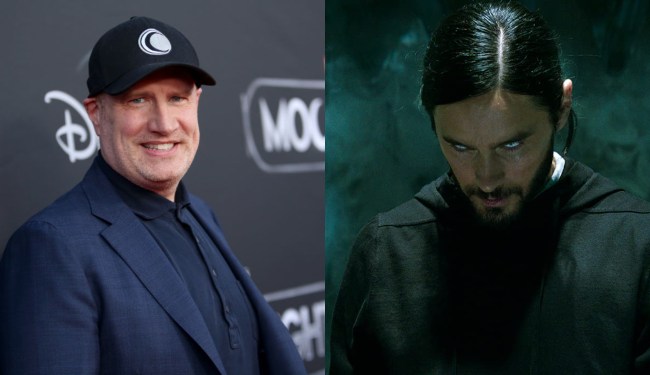 While most Marvel fans seem to enjoy the seemingly intentional stupidity of Venom and Venom: Let There Be Carnage, that certainly wasn’t the case with Morbius, which became more popular for being a meme than being a movie. And according a recent report, Marvel Studios president Kevin Feige warned Sony of such an outcome.

According to The Ankler, Feige warned Sony “not to get too ahead of themselves” with their Sony Universe of Marvel Characters, now known as Sony’s Spider-Man Universe… which is *exactly* what they’ve proceeded to do.

Kevin Feige is said to have previously warned Sony not to get too ahead of itself in terms of building some larger universe with the SUMC.

He also still offers notes on all of Sony’s Marvel films.

Feige — obviously one of the most visionary producers of the 21st century — obviously knew what he was talking about as Sony’s Spider-Man Universe has been an absolute mess so far, as none of the three movies they’ve released, the two Venom films and Morbius, has been well-reviewed.

While Venom and its sequel have been financially successful, that was certainly not the case for Morbius, which barely broken even at the box office. Next year, Sony has the even-more-dubious-seeming Madame Web and Kraven the Hunter set to hit theaters, so there’s a very real possibility the cinematic situation in Sony’s Spidey Uni deteriorates even more.

RELATED: Sony’s Decision To Re-Release ‘Morbius’ In Theaters Has Reignited The Meme As Movie BOMBS For 2nd Time, Earning Just $300K This Weekend