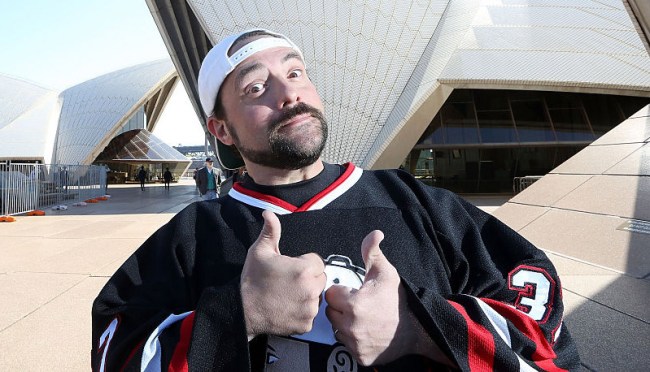 It’s been four months since Kevin Smith suffered a near-fatal heart attack due to a 100 percent blockage of his left anterior descendiny artery. The 47-year-old filmmaker suffered a “widow-maker” heart attack in February and canceled his show to go to the hospital, a move that he claims saved his life.

Smith’s doctor ordered him to shed 50 pounds and to stop eating like a high school stoner. So, the Clerks director adopted a plant-based, vegan diet from magician Penn Jillette that he wrote about in his book “Presto!: How I Made Over 100 Pounds Disappear and Other Magical Tales.” In less than two weeks following the health scare, Smith dropped 20 pounds.

Today, the Weight Watchers ambassador said he’s “now at the absolute adult thinnest” he’s been since he “finished high school.” He’s shaved off 43 of the 50 pounds he’s set out to lose.

Today, I am down a total of 43 pounds! Only 7 more pounds until I’ve shed the 50 my Doctor told me to lose following the heart attack! I wanna thank #pennjillette (the taller half of @pennandtellerlive) for his book #presto, @raycronise for the all-potato kick-start to my journey, and @weightwatchers for making it easy to lose some more while maintaining the weight loss! This #wwambassador is now at the absolute adult thinnest I’ve been since I finished high school! And while I may look a little better, I FEEL fucking fantastic! It’ll take a few weeks, but I’m ready to lose that final 7 pounds! And when I hit my goal, I’ll let you know where I started…

Last month, Smith posted this side-by-side of him then vs. 10 years ago. Looks like a different dude.

Hopefully Smith can keep the health train alive so he can keep making great flicks.