A Eulogy For Keystone Ice 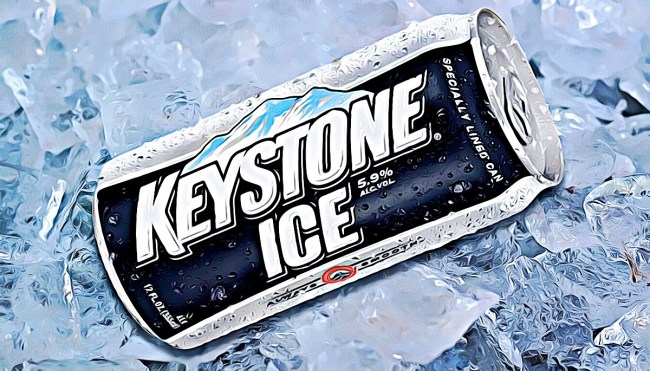 Back when I was a college student with a bank account balance that made a case of Bud Light qualify as a “luxury purchase,” I can’t say I was particularly discerning when it came to picking what beer I drank to get where I was looking to go.

At the time, my definition of “brand loyalty” was “whatever 30-pack contained the most alcohol for the cheapest price,” and it was rare for me to stop by a liquor store without pulling out my phone to do some quick math to see what was going to give me the most bang for my buck.

As a result, the fridge in my dorm usually featured a steady rotation of beers with “Light” in their name. However, I can vividly recall the night I was able to switch things up a bit after stumbling across a pile of cases of Keystone Ice being sold at a price that made it the only natural choice. I do not, however, remember most of what unfolded once I popped open the fourth can a few hours after stocking up.

That fateful evening was the start of my lengthy (and rocky) relationship with Keystone Ice, as the 5.9% ABV concoction (compared to the relatively wimpy 4.1% punch Keystone Light packs) would frequently serve as the catalyst for what I like to call “Mad Libs Nights”—the kind of evenings where you need other people to help you fill in a bunch of blanks the following morning.

Keystone Ice and I eventually went our separate ways after I reached a point in life where I no longer required the services of a calculator when it came to deciding what alcohol to purchase, although we did have a brief fling a few years ago at my college reunion.

Sadly, it appears that meeting may end up being our last, as I recently found myself blinded by some truly devastating news after Molson-Coors announced its decision to permanently discontinue 11 of its beer brands— including my formerly beloved Keystone Ice.

This loss was further compounded by the almost equally tragic fate of Steel Reserve 211, the 8.1% ABV malt liquor traditionally reserved for only the bravest Edward Fortyhands contestants. While I doubt there are many people out there who are truly devastated by any of these losses, coming across this news is sort of like hearing about the passing of an old high school friend you lost contact with after graduating; it’s hard not to mourn them and regret not having one final chance to catch up for old times’ sake.

As a result, I would ask anyone feeling the same way to pour one out in memory of Keystone Ice. You may be gone, but you’ll never be forgotten like all of the nights I’ll never remember because of you.