Every year, companies around the world collectively drop over $1 trillion on corporate propaganda politely referred to as “advertising” in an attempt to convince consumers to buy whatever it is they’re peddling with the help of the millions of people who work in marketing and make a living dreaming up ways to help them achieve that goal.

This is much easier said than done when you consider most people like to tell themselves they’re not susceptible to the ads many of them take active steps to avoid being exposed to. After all, no one really wants to admit that a commercial featuring a talking camel with an office job played a major role in their decision to do business with a certain insurance company even if they know that was the primary factor deep down.

However, the industry wouldn’t be as massive as it is if it didn’t produce results. It’s easy to feel superior to the people at Super Bowl parties who spend the entire night telling everyone else to shut up whenever there’s a commercial break but you’re lying to yourself if you honestly think you’re somehow immune to being swayed by the spots that are solely responsible for attracting 20% of the viewers who watch The Big Game every year.

I might be opposed to marketing on sheer principle but I’d be lying if I said I haven’t been genuinely entertained by plenty of campaigns over the years—none of which have provided me with more (possibly unintentional) amusement than Dr. Pepper’s decision to alienate half of the people on the planet by going to great lengths to ensure women knew the 10-calorie soda it introduced in 2011 is not for them.

I was also incredibly tickled by the strategy Domino’s turned to when it decided to rebrand in 2010 and called attention to the pivot with a series of commercials featuring its new president basically saying, “I’m sorry our pizza is so shitty” that were essentially the real-world equivalent of the fake South Park ad where the CEO of BP apologizes for destroying the planet.

Domino’s took a risk by harnessing that approach that ultimately paid off much better for them than it did for other companies who’ve decided to tinker with the formula responsible for their success, as Coca Cola had famously highlighted the potential pitfalls of going that route 25 years earlier with the infamously disastrous launch of “New Coke.”

The fiasco that ensued after someone decided it would be a good idea to fix an iconic soda that wasn’t really broken in the first place highlighted one of the biggest issues that major players in the food and beverage space are constantly grappling with: the need to constantly innovate while preserving the fundamental elements that made you famous in the first place.

KFC may have missed the marked with its egregious decision to remove potato wedges from the menu earlier this year but the company that once asked “What if you made a sandwich using fried chicken instead of buns?” before doing exactly that when it debuted the Double Down a decade ago has continued to push boundaries without tweaking the secret blend of the 11 herbs and spices Colonel Sanders used to cement himself as a culinary legend after he finalized the recipe in 1940.

Another thing that’s remained largely unchanged is the slogan it’s been using to remind people its signature offering is “Finger Lickin’ Good” since a KFC manager coined the phrase while filming a commercial in 1956. However, the current state of the world has forced the chain to reevaluate things after realizing it might not be a good idea to encourage customers to use their tongue as a cleaning implement in the middle of a pandemic sparked by an infectious disease.

As a result, the company recently announced it will temporarily be altering the slogan until the world reaches a state where it’s safe to lick your fingers again—a change that’s already been reflected in ads featuring a censored version. 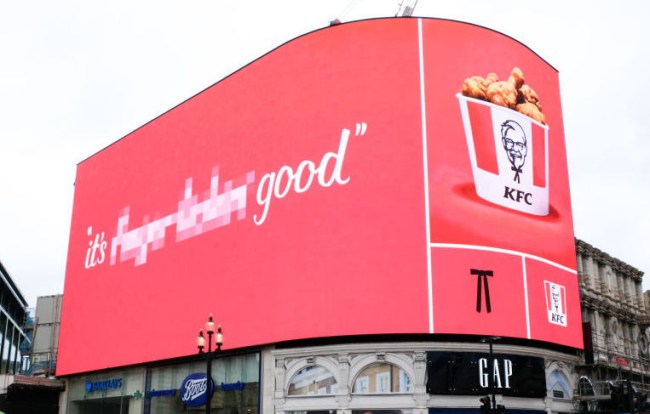 I’m not sure if this was the intention but I’m going to assume KFC’s new slogan is “It’s Finger Bangin’ Good” until further notice and nothing they can say will change my mind.