Not All Heroes Wear Capes: Fearless Kid Destroys An InfoWars Reporter, Calls Him A ‘F***ing Idiot’ 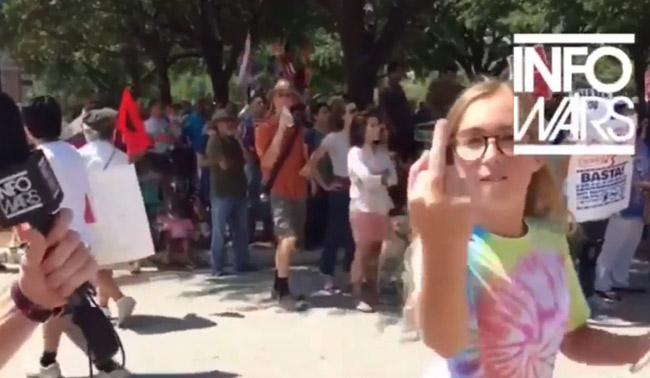 Oftentimes heroes can come from the most unlikely of places. You never know when one will cross your path in the most unexpected way or place. Today is one of those days and it comes in the form of a fearless child who was confronted by an InfoWars reporter.

During one of their typical man-on-the-street segments an InfoWars “reporter” approached a girl and asked her, “How are you young man?”

After pausing to take in the situation, her douchebag radar kicks in and she replies, “You’re a fucking idiot.”

Now whether she felt this response was appropriate because the guy misidentified her gender or if she just saw the InfoWars logo on the microphone and an immediate red flag went up is irrelevant. What’s relevant is that she said what people the world over have wanted to say to say to anyone associated with InfoWars.

The reporter, obviously stunned by being told he is a “fucking idiot” responds with “Wow, who taught you that language?”

She answers him back with “my mother” and then proceeds to flip the bird to the reporter and his cameraman before walking away like a boss.

Watch it in all its glory below. Then re-watch it again, because once really isn’t enough to get all the enjoyment out of it that you can.

Kids telling Infowars they're fucking idiots is my favorite kind of content pic.twitter.com/dRneam1BWm

"How are you young man" (is clearly talking to a girl)

I want to have a beer with her

This girl's our future President 🇺🇸

I love that child as if she were my own 💜

Don't mess with the little girls right now. They are readying themselves to pick up the pieces and fix this broken world.

there is hope for the future yet

🎶I believe the children are our future…🎶

Kids can see that bullshit a mile away.

If this was my kid, she'd be getting a pony.

I assume adopting that child is out of the question, since she has a mother?

Oh my god, it's practically impossible to choose my favourite part. His indignation? Her 'in the car' response? WELL DONE THAT MOM