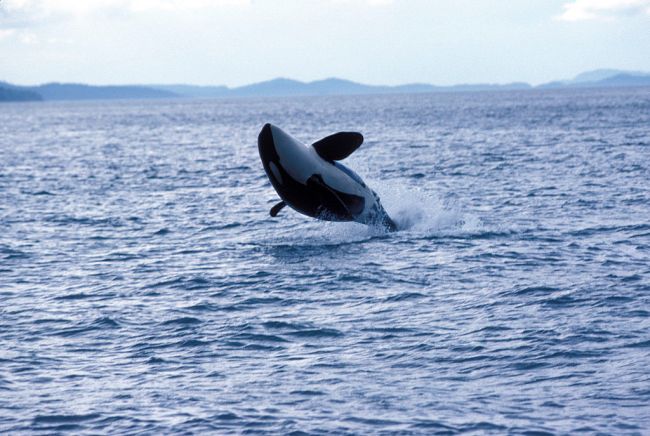 Killer whales have rammed boats off the coast of Spain and Portugal this summer. Bewildered scientists aren’t sure why the orcas have engaged in such atypical aggressive behavior. Are they tired of our sh*t? Is this the first stone cast in the animal rebellion? Is this revenge for SeaWorld? Is this the latest way that 2020 is trying to kill us?

Between July and August, there have been several attacks by killer whales on ships in and around the Straight of Gibraltar.

“I’ve seen these orcas grow from babies, I know their life stories, I’ve never seen or heard of attacks,” Rocío Espada, who works with the marine biology laboratory at the University of Seville, told The Guardian.

On July 29, a pod of nine orcas rammed a 46-foot-long boat off the coast of Cape Trafalgar in the Straight of Gibraltar. The killer whales started “ramming the hull, spinning the boat 180 degrees, disabling the autohelm and engine.” The orca pod kept pounding for an hour, which is 58 minutes longer than you on a good night.

“The noise was really scary. They were ramming the keel, there was this horrible echo, I thought they could capsize the boat,” said crew member Victoria Morris. “And this deafening noise as they communicated, whistling to each other. It was so loud that we had to shout.”

The killer whales broke the rudder into pieces, causing the vessel’s crew to not be able to steer the boat, and the ship had to be towed to land. The boat was inspected, and there were orca teeth marks on the underside of the ship.

“For killer whales to take out a piece of a fiberglass rudder is crazy,” said Espada, who has observed Gibraltar orcas for years. Move over murder hornets, killer whales are the latest creature to try end humans in 2020.

Since July, there have been other reports of orcas menacing boats in the Straight of Gibraltar. On July 22, yacht owner Beverly Harris said that orcas attempted to push her boat. “I had this weird sensation, like they were trying to lift the boat,” Harris told The Guardian.

Scientists aren’t exactly sure why the killer whales are harassing boats. Orcas are generally welcoming to boats, even playfully racing them in the water. Researchers surmise that the killer whales could be acting out because of stress. Heavy ship traffic in the strait could be unnerving the Gibraltar orcas.

Another possibility is that calves rarely survive to adulthood, and Gibraltar orcas are already endangered with fewer than 50 left.

The other hypothesis is that orcas are fighting with humans for bluefin tuna. The killer whales may see fishing boats as competition for the food supply.

“If we are talking about whether killer whales have the wherewithal and the cognitive capacity to intentionally strike out at someone, or to be angry, or to really know what they are doing, I would have to say the answer is yes. They are likely defending a territory or resources,” Lori Marino, neuroscientist and president of the Whale Sanctuary Project, told The Guardian.