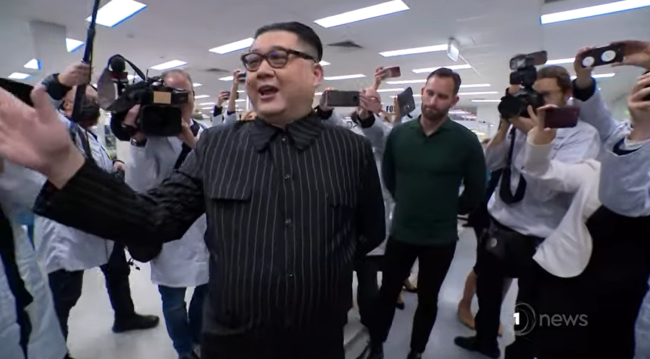 Somehow, the man, who later identified himself by the stage name Howard X, was able to bypass security checkpoints, interrupted the event, and began speaking to the media.

The man proclaimed that Liu was supporting the Chinese Communist Party “and now she’s going to support the North Korean regime.”

“Thank you very much. Gladys Liu is the communist candidate for Australia,” the man said, before being cut off by one of Morrison’s aides.

“Excuse me, mate, you are going to have to leave, this is the most offensive thing I’ve ever seen on a campaign … this is a private business,” the aide reportedly told the man.

“Excuse me, you don’t tell the Supreme Leader what to do. I support Gladys Liu,” the man replied back.

He was then questioned by police and escorted from the building.

“This is actually one of the best things we’ve ever managed. Love you Howard you beautiful genius,” he tweeted.

I can neither confirm nor deny reports that I have been in contact with Kim Jong Un impersonators https://t.co/uEe1JwgbqD pic.twitter.com/lFV5P6fg7x

Our friend Mr Kim Jong Un has paid a visit to the Prime Minister’s press conference with Gladys Liu today in Chisholm to express his utter admiration and respect for Gladys Liu – they are both mutual friends with Xi Jinping! ❤️🇨🇳🇰🇵 #auspol pic.twitter.com/ID1JI2tZg1

Our wonderful pressure campaign against Gladys Liu continues with North Korean Supreme Leader Kim Jong Un endorsing Gladys at her press conference with the PM this morning. Please join me, @maxmokchito and the Supreme Leader outside Gladys Liu’s office at 6 PM for presser! pic.twitter.com/hobGmLb359

Meanwhile, over in the real world of Kim Jong Un, the Supreme Leader has had his hands full ordering a national lockdown of North Korea after a subvariant of the Omicron variant of the coronavirus was discovered in Pyongyang, reports the New York Times.

Prior the announcement which stated the country now had approximately 350,000 cases of people infected, North Korea had made the dubious claim that it had been coronavirus free this entire time.

Mere hours after declaring the “maximum emergency” in the country, Jong Un launched three ballistic missiles toward the sea off its east coast, North Korea’s 16th missile test this year, according to South Korean military.

It ain’t easy being the Supreme Leader.