No, Kim Kardashian And Kanye West Did Not Meet With President Trump To Free Joe Exotic, It’s Just A Bad April Fool’s Joke 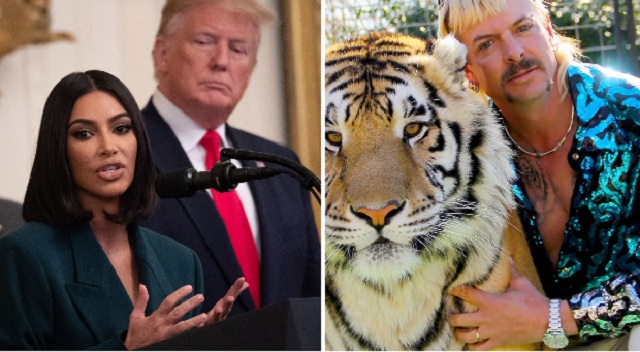 It’s April Fools’ Day which means it’s time for news publications to put out fake news articles for clicks to later claim it was all just a joke.

Today, High Snobiety released this AN article titled “Kim Kardashian & Kanye West Reportedly in Talks With Trump to Uncage Joe Exotic” that went viral on their Facebook page with people sharing it as if it were a real story despite the fact that it’s obviously a joke.

The basic gist of the article is that Kim K and Kanye are in talks with President Trump in commuting Joe Exotic’s prison sentence.

Donald Trump is reportedly in talks to commute Joe Exotic‘s prison sentence following lobbying efforts from Kim Kardashian and Kanye West. While the pair were unable to attend a scheduled meeting at the White House due to social distancing implementations, it has been reported that the trio discussed Exotic’s incarceration via Zoom earlier today.

Kardashian and West join a myriad of celebrities who have called for Exotic’s release since the docu-series Tiger King: Murder, Mayhem and Madness premiered on Netflix last week. The couple echo sentiments from the likes of Cardi B, who feels that Exotic should be uncaged from his 22-year prison sentence for trying to arrange the murder of his adversary, Carole Baskin.

The High Snobiety article includes a ridiculous quote with a Liger enthusiast named Terry Goodkitty speaking in a redneck slang which should ring alarm bells for those reading the article.

Speaking exclusively to Highsnobiety, Liger enthusiast and animal welfare expert Terry Goodkitty said, “I’m as riled up as a mangy dog gettin’ sudsed up in the tub. It ain’t right that some famous celebrity can ring up Trump and take a dump on the concerns of all them big kitties.”

She continued, “They ain’t got no president who’s gonna care for em or listen to em purr real good. Just because that murdering pelt-wearin Kardashian can string two words together don’t make her a lawyer, so I don’t see why any federal counsel would treat her as such!”

At the time of writing, April 1, further details of the conversation between Kardashian, West, and Trump regarding Exotic’s case have yet to be released to the public. Details to follow.

Despite the fact that it’s an obvious April Fools joke other outlets have picked up the story.

People on Twitter have also been falling for the fake news story.

@KimKardashian and @kanyewest do not try to release Joe Exotic. He did not care for those animals and ripped apart babies from their mothers way earlier than they should be. He deserves to be where he is.

Anyone else find the reports that Kim Kardashian is in talks with Trump to release Joe Exotic from prison an odd priority during a global pandemic where healthcare workers in the US are dying from a lack of PPE? The exact type of medical equipment Kim has the means to fund?

Kanye & Kim in Talks With Trump to Free Joe Exotic #SmartNews #seriously…I’m glad they got the mans ear now, can you put it to much better use? https://t.co/wnhhMOl6NU

⁦@kanyewest⁩ & ⁦@KimKardashian⁩ in Talks With ⁦@realDonaldTrump⁩ to Free Joe Exotic. This shit better not be true! The Trump can’t even handle the pandemic & should be busy getting the states the supplies they need. #PeopleAreDying https://t.co/aJioiYn2G4

It’s going to be a long day if people are falling for stories like these.