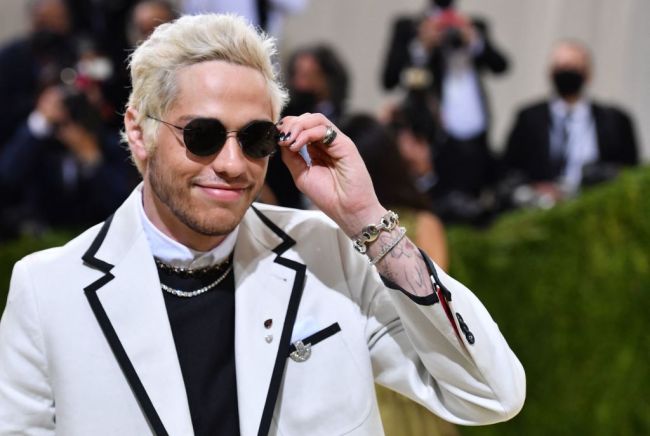 Over the Halloween weekend, Kim Kardashian West was spotted with Pete Davidson at Knott’s Scary Fam in Buena Park, California, on Friday. In exclusive photos obtained by PEOPLE, the two can be seen riding multiple rollercoasters together and, in one, they are even holding hands.

An inside source told PEOPLE that “they hang in the same circles so they will be together from time to time,” and said that they are just friends hanging out.

Davidson, 27, is friends with Travis Barker through their mutual friend Machine Gun Kelly. Barker is engaged to Kim’s sister Kourtney Kardashian and the couple was at Knott’s with Kim and Davidson on Friday.

Despite the denial that the two are dating, the internet ran with the images of them together. Immediately, everybody put Kim and Davidson together. Especially considering that they shared an onscreen kiss during an SNL skit last month.

One internet theory in particular, however, is absolute gold.

The conspiracy believes that Pete Davidson is getting revenge on Kanye West for sticking him with an expensive bill at Kid Cudi’s birthday party. Yes, that’s a real thing that happened.

Davidson, who is friends with Cudi, was invited to celebrate the musician’s birthday in January of 2019 at Nobu — a very expensive sushi restaurant in Malibu — with his manager and producer. Under the impression that it was just the three of them, Davidson arrived early to give the restaurant his credit card and treat “his boy” to a birthday dinner.

As Davidson joked, “everybody’s like, you know, skinny and whatever, it’s all fine.”

And then Timothée Chalet showed up. It was still no big deal, because he’s “also skinny, so it’s going to be fine.”

Cudi turned to Davidson and said that Kim K and Kanye West, who were still together at the time, were on the way. Davidson, while pretending that it would be awesome, started freaking out about the bill. He joked that he needed to call his manager to book more shows.

When the two showed up, Kanye first requested the special room in the back. When it became time to order, Kanye said “I want that stuff that’s not even on the menu! That crazy stuff!”

You can hear him tell the full, hilarious story here:

Because of this story, one Twitter user theorized that Davidson is out for revenge. To do so, he is kissing Kim K on live TV and holding her hands on rollercoasters.

This more than likely is not true, and as of right now the two are “just friends” anyway. But with that being said, it’s absolutely hilarious to imagine that Davidson is intentionally getting back at Kanye for leaving him with an expensive tab at Kid Cudi’s birthday dinner at Nobu.