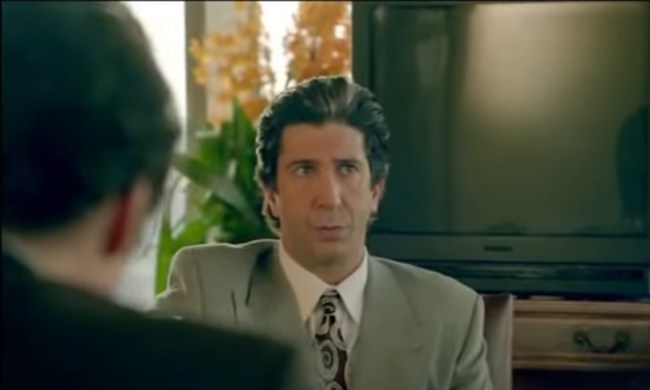 The People vs OJ

Kim Kardashian has had a very interesting 40th birthday.

Just a few days ago, Kim revealed that she had flown 40 of her friends and family to a private in Tahiti to celebrate her birthday.

After 2 weeks of multiple health screens and asking everyone to quarantine, I surprised my closest inner circle with a trip to a private island where we could pretend things were normal just for a brief moment in time. pic.twitter.com/cIFP7Nv5bV

On Thursday, Kim shared a video of a 3-D hologram of her dead father wishing her a happy birthday that was gifted to her by Kanye West.

For my birthday, Kanye got me the most thoughtful gift of a lifetime. A special surprise from heaven. A hologram of my dad. ✨🤍 It is so lifelike! We watched it over and over, filled with emotion. pic.twitter.com/jD6pHo17KC

People thought Kanye’s gift was a little weird and went on to make the same David Schwimmer Joke. For those who don’t know, Schwimmer played Robert Kardashian on the miniseries The People v. O.J. Simpson.

this is what happens when david schwimmer isn't available to appear in character pic.twitter.com/AeAAEPTN2o

Kanye could’ve just called up David Schwimmer instead. Would’ve been much cheaper, and a LOT more convincing… pic.twitter.com/N8O0nP4ael

Kanye could have hired David Schwimmer to reprise his role of Robert Kardashian, and it would still be creepy but less so

Why does he look like David Schwimmer in American Crime Story tho? https://t.co/zGNsP9QGTE