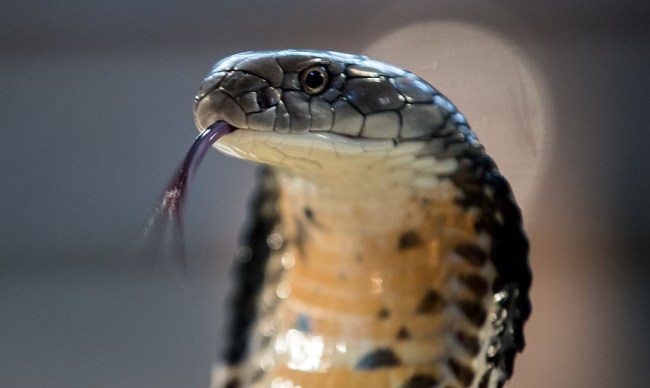 Who ya got: a king cobra or a giant python in a fight to the death? In this battle between the two lethal snakes, there were no winners because both slithering creatures died in the battle to the death.

The Physics & Astronomy Zone Twitter account that emphasizes science education shared an interesting photo of a snake versus snake fight. The photo showed the aftermath of the crazy battle between a king cobra and a reticulated python somewhere in Southeast Asian. The amazing nature photo went viral, racking up over 21,000 Retweets and more than 54,000 Likes.

The reticulated python was able to literally squeeze the life out of the king cobra, but not before the cobra got one last death strike in. The king cobra injected its deadly venom into the python, eventually killing it. Leaving both snakes intertwined in a twisted death scene.

King cobras are cannibal snakes that grow to be as large as 18-feet-long. Reticulated pythons are the longest snakes in the world, some grow to a whopping 30-feet-long. They use their long and powerful bodies to crush and constrict their prey.

The same photo went viral a year ago when it was posted on Facebook by the Reptile Hunter page. The caption on the photo said: “A King Cobra (the worlds longest venomous snake) has attempted to catch, kill and eat this Reticulated Python (grows to be the longest snake in the world) and has been coiled and strangled by the python and died in the process. Both were dead when found. The King has met its match.”

Here are some other videos of snakes versus snakes. Enjoy trying to sleep tonight.