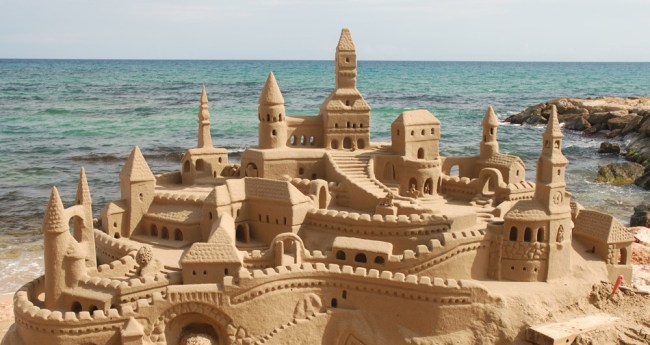 For the past 22 years, Marcio Mizael Matolias has lived in a sand castle on the beach of Barra da Tijuca in Rio de Janeiro, Brazil. Yes, you read that right, he lives inside a sand castle.

The 44-year-old, known to locals as King Marcio, often poses on his “throne” wearing his crown and holding his scepter, that is, when he isn’t reading, golfing or fishing, his three passions in life.

As one can imagine, his “castle” requires more than a little bit of upkeep, reports the Mirror…

However, unlike other monarchs, ‘King Marcio’ is personally responsible for conducting repairs to his palace, whether it’s the dungeons or a door.

He also has to constantly water his home to keep it from collapsing, Lavoixdunord.fr reports.

Despite this inconvenience, Matolias says he would not have it any other way.

He said: “I grew up in the Bay of Guanabara, I always lived on the beach. People pay exorbitant rents to live in front of the sea, I do not have bills and here I have a good life.”

The castle itself is just three square meters on the inside, is filled with books and golf clubs, and according to Matolias, can at times become uncomfortable…

“The sand holds all the heat, so sometimes at night I can not sleep here, I’ll spend the night at a friend’s house, but I prefer it here even if I have to lie outside by the sea,” he said.

That being said, even if his castle collapses, Marcio says he can just build another one, no problem.

So, what do you think? Is King Marcio crazy or a real man of genius?