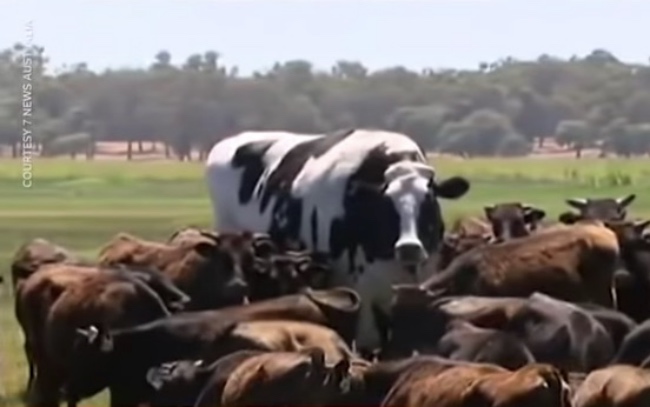 What’s up, my dudes? Are you having a good day so far? Well, it’s about to get a lot damn better after you feast your eyes on the biggest damn cow on planet earth.

This isn’t hyperbole, at 76.378 inches (194cm or 6’4″) this is the largest bovine that you’ll find anywhere on the planet. The cow itself resides in Western Australia and it’s a god amongst men. It walks and feeds with other cows but this thing weights a whopping 1.4 tons or 2,800-pounds.

This damn cow’s almost as tall as Michael Jordan and it weighs as much as like five Charles Barkleys. It’s truly the living embodiment of the word ‘gargantuan’. Honestly, if I look up the definition of ‘gargantuan’ in the dictionary tomorrow I better hope I see a picture of this damn cow that’s gone viral.

Look at this abso-fucking-lute unit and tell me that this isn’t a cow you’d want to ride into battle instead of an elephant or horse if this was like 1300 years ago. Seriously, this cow is probably more stable than those other creatures and the charging enemies would likely shit their pants when they see this thing.

The cow’s name is Knickers. He’s a Holstein Friesian Steer. And he probably takes bigger dumps than any animal on the planet. Seriously, the methane leaking out of this cow’s ass is likely causing another hole in the ozone layer.

Thankfully for Knickers, he’s too large to be slaughtered. He’s so damn big that they won’t even turn him into hamburger meat. Instead, he’ll be left to breed and serve out his term as the biggest damn cow there ever was. He’s more than double the average weight of his Holstein Friesian Steer peers and could be made into more than 4,000 hamburgers if he was cut down in his prime but that’s not his fate, is it? His fate is being a total badass.

So……. you're saying the steaks are high.

At 194 centimetres high, WA-born steer Knickers is believed to be the tallest in Australia — and one of the tallest in the world. https://t.co/ZCOZVh124z pic.twitter.com/OAW8JcWozX

Knickers the Cow has gone viral after the cow made the local news in Western Australia and he’s since been trending on Twitter where nobody can believe their damn minds while looking at this absolute unit. There are hundreds of thousands of cars on this planet that don’t weigh as much as this cow.

Trust me, your life is better just knowing this cow exists. You can now go forth into the world and share the good word of Knickers.

For more on Knickers, you should click here to read about his story over on ABC Australia.