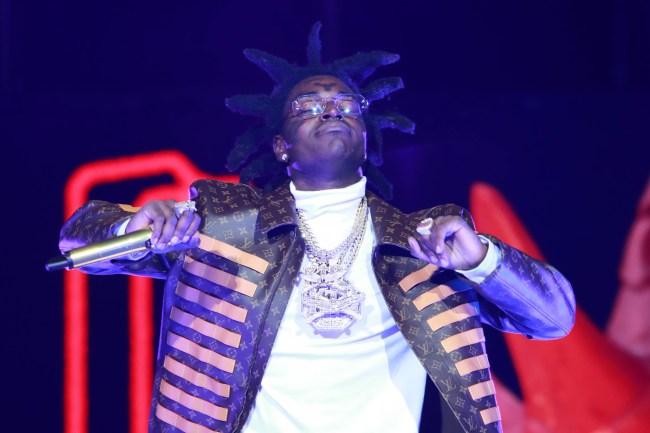 Kodak Black is making the rounds on media appearances right now to promote the release of his fifth studio album, Back for Everything. This morning he joined Power 105.1’s The Breakfast Club with Charlemagne, Angela Yee, and DJ Envy.

Kodak’s had a couple of interviews in the past with The Breakfast Club. Some of those went smooth, others not-so-smooth. However the one constant you can gurantee when Kodak joins the show is he won’t shy away from any questions.

One thing Kodak said that was far from appropriate was when Charlemagne asked him about the female artists Kodak signed to his label.

Kodak talked about controlling who his female artists on his label can work with, suggesting he would approve of what men they can and can’t collaborate on music with.

The entire cast of The Breakfast Club called him out, especially Charlemagne. Kodak then ended up backtracking on the comments and said he had some growing up to do.

Kodak also talked about getting shot in the leg while attending Justin Biebers afterparty in LA over Super Bowl weekend. Kodak was one of four victims who got shot after an argument erupted when he, Lil Baby, and Gunna were leaving the party.

Kodak revealed he’s been using a walker to help him get around and that he doesn’t believe him getting hit was intentional.

Perhaps the most interesting story Kodak talked about was how last week Drake sent him 6.6 Bitcoin (now $250,000 at the time of this writing) out of the blue.

Drake supposedly asked Kodak to setup up a crypto wallet and to get his email address correct so Drake could send him some crypto. Kodak said he was surprised because there was no reason as to why Drake wanted to send him the Bitcoin.

Charlemagne pointed out how well Drake has treated Kodak and suggested there might be some future collaboration in the future with Kodak and OVO. Kodak only responded with laughs, saying “That’s crazy.”

How to Watch Entire Interview

You can watch the entire Breakfast Club interview by checking out the YouTube video below.

Kodak also released a music video of one of the new tracks on the album yesterday.

Back for Everything releases Friday, February 25th.