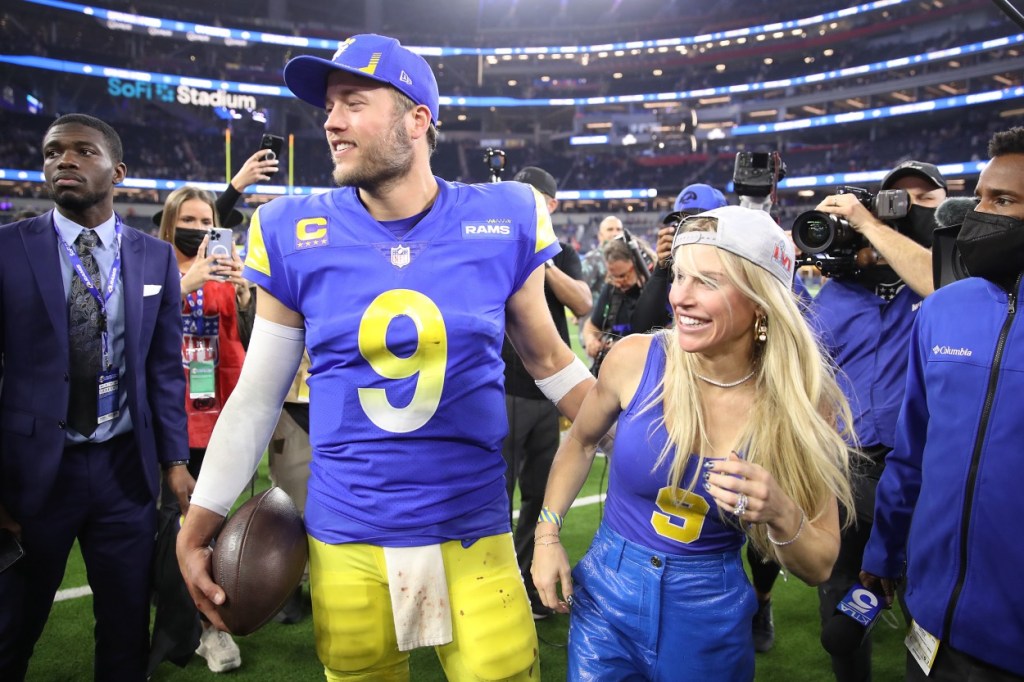 Matthew Stafford led the Los Angeles Rams to a win over Cincinnati in Super Bowl LVI and with great power comes great responsibility. After partying all night long, he had to wake up on just one hour of sleep and record an episode of The morning after with Kelly Stafford, his wife’s podcast, and then bring his entire family to Disneyland while severely hungover. Or in Kelly’s words, they recorded the podcast while ‘still hammered.’

Kelly Stafford has some funny photos on her Instagram story of the family at Disneyland. She’s riding the merry-go-round with their four kids while suffering through a brutal hangover and then her story flashes to Matthew who is riding a Disney float. Check her IG story to see those before they’re gone.

Kelly’s podcast is perpetually interesting but this episode is pretty incredible. The Staffords kick it off with Matthew asking about a battery pack and his wife chiming in with “this is how you know you’re still hammered, is because we said it’s the morning after the Super Bowl and you dive into the f—ing battery pack?”

Then Kelly’s producer chimes in to set the scene that she woke Kelly and Matthew up at 7 am and they’re recording in the Stafford’s backyard in Los Angeles after they partied all night following the Super Bowl in. Kelly said they got home at 5 am (they left Drake’s house at 4 am) and still hadn’t brushed their teeth. She kicks it over to Matthew to ask how happy he is and this is where you can tell he’s really riding the struggle bus and either needs a drink or he needs to go back to sleep.

Matthew: Very happy. I don’t think it’s really hit yet to be honest.

Kelly: It will. I think it will hit when you’re going to be race chugging beers on the parade float.

Matthew: The parade is probably going to be a pretty good moment.

Kelly: We have to go to Disneyland today with our children in like an hour, I don’t understand why they do it the day after the Super Bowl.

Matthew: Disney’s not sponsoring the podcast, I don’t even feel obligated to say ‘thank you’ because it’s just rude to do to somebody. ‘Congratulations on winning the Super Bowl and partying your you-know-whats off, I can’t wait for you to bring your four kids screaming here tomorrow. I just hope you can act happy.”

Meanwhile, Kelly and Matthew are wearing matching ‘smiley face’ sweaters that were from his ESPN photoshoot titled ‘found his happy place’. Kelly says Matthew wore it after the Rams’ first game and then Kelly bought a matching one so they went out and partied after the Super Bowl wearing matching sweaters.

Then we get to the good stuff. After they left the stadium, Matthew and Kelly Stafford went to Harriet’s in West Los Angeles which is on the rooftop of the 1 Hotel. They have a decent food menu but it’s more about the bottle service and that’s where the party started but it quickly moved to Drake’s house.

Kelly’s co-host: So you guys went to Harriet’s after the game and then you ended up at Drake’s house? Is Drake cool?

Kelly’s co-host: Did he perform at all?

Matthew: No. He might’ve. Maybe he did that with scrambled eggs in the morning. We left at 4, maybe when he was frying up some eggs he said ‘let’s go’.

Kelly: What time do you think that party ended? It was not slowing down when we left.

Matthew: I felt like a loser for leaving at 4.

Matthew: It was not his actual house. He was renting this beautiful abode and I feel so bad for the owner with the things that were going on in there.

They also mention Cardi B was not there and they all seemed pretty bummed about that.

Kelly’s co-host: Were there any other people there that you were like whoa?

Kelly: Who’s the guy that walked in, the Georgia boy, the rapper?

Matthew: Quavo. I met him a few years ago, my guy. He’s an Athens, Georgia guy so I met him at the Super Bowl in maybe Indy. He’s actually got a pretty good arm for a football player.

Kelly’s co-host: How do you feel about the fact that you are Leonardo DiCaprio’s favorite football player?

Matthew: it’s only fitting. Y’know. And the fact that he’s probably one of my favorite actors so it probably just happened in the atmosphere. He felt that love.

For what it’s worth, Kelly Stafford did throw up again. She had a history of throwing up before Matthew’s big games. You can stream the full episode right here:

I never expected to enjoy Kelly Stafford’s podcast so much but I’ve been loving the recent episodes and this one with hungover Matthew Stafford is the best yet.