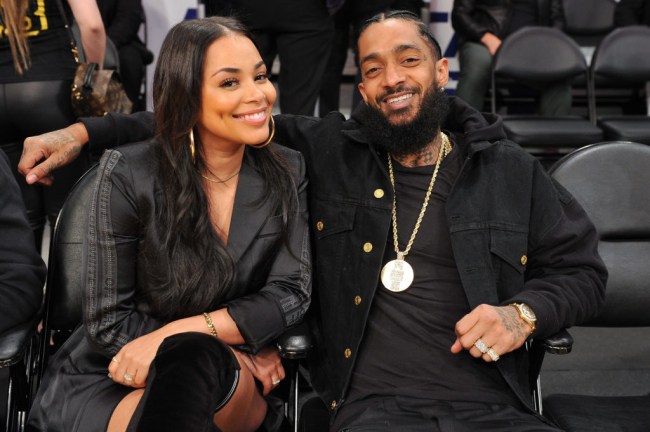 It has been less than a week that Nipsey Hussle was murdered, but that hasn’t stopped Kodak Black from shooting his shot with the dead rapper’s girlfriend Lauren London.

Only days after Nipsey Hussle was violently murdered in front of his clothing store in Los Angeles, Kodak Black is swooping in to steal the iconic West Coast mixtape rapper’s love of his life. In an Instagram Live post, the Florida rapper talked about stealing Nipsey’s girl.

“Lauren London that’s baby, though. She about to be out here single. She’s fitting to be a whole widow out here. I’ll be the best man I can be for her. I’ll give her a whole year. She might need a whole year to be crying and sh*t for him – I ain’t trying to shoot [my shot] at her. I’m saying, listen. She can do two, three years. I’ll try to be like the friend if you need to holla or a shoulder to lean on. She can call my line.”

"She fittin' to be a whole widow out here. I'll be the best man I can be for her. I'll give her a whole year. She might need a whole year to be crying and s—- for [Nipsey].” pic.twitter.com/ZFkwLNk7P9

London, who is the mother of Nipsey’s child, has been dealing with the grief of losing her “best friend” and father of her child. In an Instagram post she said she was “completely lost.”

Twitter has already dragged Kodak Black for his insensitive comments about Nipsey Hussle’s girlfriend. Fans and celebrities such as The Game and R&B singer Tank came out against Kodak Black’s comments, some suggested that he should be canceled.

Tank also had a few words for Kodak Black pic.twitter.com/vRzcjvYFXq

@KodakBlack1k What the Fuck is wrong with you bro. You being real disrespectful right now. How you gone say some hoe shit like that after @LaurenLondon just lost that man. Grow the fuck up bro and stop trolling bro FR. #Nipsey

@KodakBlack1k is digging himself a 6 foot hole talking mess like that. Disrespecting Nipsey and Lauren like that. Somethings wrong in his head

Kodak black needs to be fucking cancelled!!! This nigga talking about how he ready to slide on lauren cause she a widow..thats fucked up

It took y’all this long to realize Kodak Black is a trash individual pic.twitter.com/CqDifjCVDy

Kodak Black’s comments about Lauren is a major reason why I’m so sad about Nip being gone. Just look at these clowns the rap industry is left with. Sickening.

the audacity of kodak black to think he could ever have a chance with lauren london. lauren? lauren??? pic.twitter.com/Zo4dV91ba4

Like I said Kodak Black’s way of trolling isn’t even funny or entertaining in any way shape or form. He comes off as a pure idiot who’s mad thirsty for attention https://t.co/EY3NtDZp4z

Only weeks ago, Nipsey and Lauren appeared in a GQ video showing how well they knew each other.