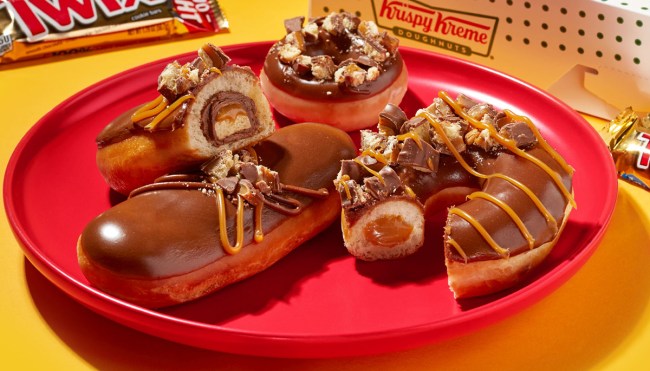 For my money, donuts are the ultimate “I’m Not Even Pretending To Be Healthy Today” food, as there’s no better way to tell you’re body you’re not planning on doing it any favors than eating deep-fried dough covered in sugar to kick off your morning.

As a result, I’m of the opinion that if you’re going to have one, you might as well embrace that reality and really lean into the virtual lack of nutritional value by opting for the most excessive, over-the-top option on whatever menu you’re browsing.

The masterminds at Krispy Kreme have traditionally provided customers with plenty of options to do exactly that. In addition to the flagship offering that literally melts in your mouth, the chain has teamed up with a number of brands including Oreo and Reese’s to take things to the next level, but I think it’s officially outdone itself with one offering it recently unleashed on an unsuspecting world.

On Monday, Krispy Kreme revealed its newest collab with Twix, which features a few different doughnuts inspired by the caramel and cookie filled-chocolate candy bar—including one that features an entire Twix bar in the middle.

Introducing our first ever collab with @TWIX! Chocolatey, caramelly, crunchy goodness combined with your favorite doughnut—everything you love, inside & out!🍩

Available through 3/6 at participating locations!

The doughnut that’s best described as a “Twixception” quickly came to the attention of people online, and based on most of the reactions I’ve come across, fans are very here for it.

I just got diabetes looking at this picture and I’m still going to see where the closest location to me is 🤤… Now to decide left twix doughnut or right twix doughnut? 🤔 https://t.co/46m1Ojq5ym

Game, set, match. We may all die of complications from diabetes and heart issues but kudos to Krispy Kreme for winning the donut wars.

Krispy Kreme is putting an entire Twix bar in a doughnut https://t.co/YvzPdmKa4i

Jared's Doctor: You need to maintain a heart-healthy diet.

If you want to grab one for yourself, you can snag one at Krispy Kreme until March 6th.