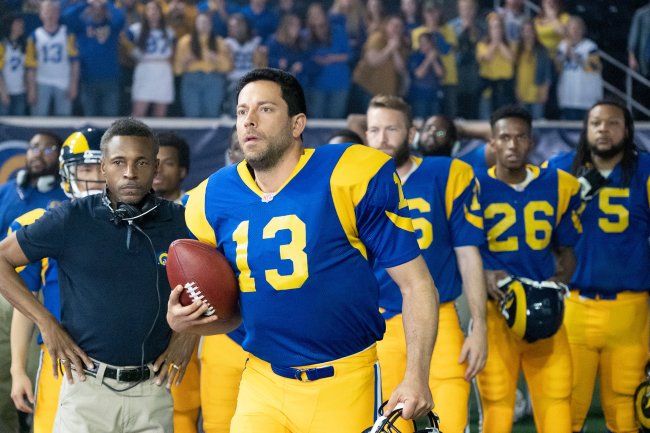 Before we dive into American Underdog: The Kurt Warner Story, let me say this: it’s a dream of mine to write a movie someday, so most of the people involved in this project are literally living out my dream. I am not trying intentionally disparage the work of anyone involved in this — I am merely providing the bridge between you, the reader, and the greater opinion of the world wide web. And let me tell ya, the internet has been having an absolute field day with American Underdog: The Kurt Warner Story, which released its first trailer/featurette this morning:

Chase your dream. Watch an exclusive behind-the-scenes look of American Underdog – in theaters this December. pic.twitter.com/IQbjwLTsgO

Not only were football fans generally surprised by the news of a Kurt Warner movie but were stunned by the quality of the trailer, which is perhaps best described as looking like one of those aggressively upbeat pharmaceutical commercials for medicines like Cialis or Allegra.

I like that the trailer for Kurt Warner: The Movie is just 75 percent Kurt Warner saying "yeah, my story is REALLY amazing. This is going to be a good movie because my life has been really cool" https://t.co/65WS1gNDon

The Kurt Warner movie looks like it was filmed inside a realy good video game from 2015 pic.twitter.com/OKUtpNCk5u

Why is there even a Kurt Warner movie being made in the first place? pic.twitter.com/tO5BmcLkCk

this looks like a really bad SNL skit https://t.co/UEEAG1wiWe

I will give them credit for casting Dennis quaid as Kurt Warner’s wife, that is spot on pic.twitter.com/VfYuK67qx7

Call me crazy but I don't remember Kurt Warner looking like this. pic.twitter.com/dqt4YKcWli

Hearing from sources that the Palme D'or frontrunner right now is the Kurt Warner movie.

Wait… They’re making a Kurt Warner movie? But why?

Is this the new Madden update ??? https://t.co/DNC0eNN3yR

Here’s the official synopsis for American Underdog: The Kurt Warner Story, via IMDB:

The story of NFL MVP and Hall of Fame quarterback, Kurt Warner, who went from stocking shelves at a supermarket to becoming an American Football star.