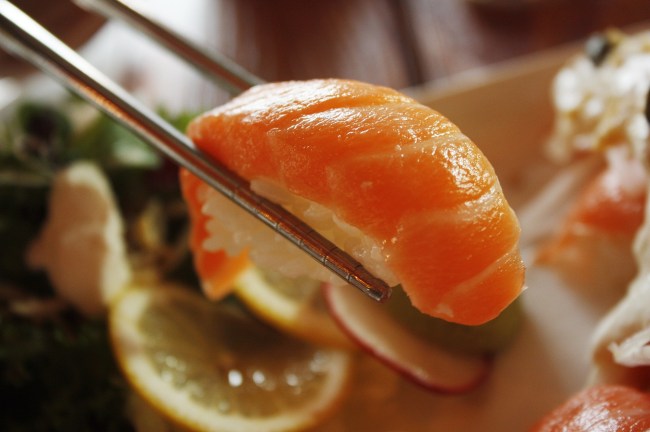 The future is now, my dudes. Lab-grown fish is upon us. I’m sitting here licking my chops thinking about the day when I can sit in a packed NYC restaurant again with a reservation that took me 5 months to land all for the chance to order lab-grown fish on a menu that costs 5x wild fish.

Wildtype is a San Francisco-based startup attempting to ease the pressure on wild salmon populations and alleviate the myriad of problems caused by the commercial fishing industry and they’re doing this by using actual fish cells to grow fish in a laboratory. I’m sorry. I know this is making you hungry. There’s not much I can do about that. I’m just here to report the facts.

Singularity Hub describes this ‘sushi-grade’ fish as being similar to what Memphis Meats is doing with cultured meat by using real animal cells and a mixture of ingredients including nutrients, sugars, salts, amino acids, and growth factor to get the cells to grow actual ‘animal tissue’ in a lab setting.

Similar to cultured meat like that made by Memphis Meats, Wildtype’s salmon starts with real animal cells and adds a mixture of nutrients, sugars, salts, amino acids, and growth factor to coax the cells to grow as they naturally would inside an animal’s body. Done right, the process can yield animal tissue that contains muscle, blood, and fat, just like you’d get from a farmed fish. Except in some ways it’s even better, because what you don’t get is mercury, microplastics, and the other contaminants that farmed fish are becoming rife with.

Wildtype created its own technology for the “scaffolds” where tissue grows. “This is applicable to other species than the salmon that we have worked on,” Wildtype co-founder Arye Elfenbein told Tech Crunch. “We basically create a scaffold that provides the right guidance…for cells to take up fats in different places or become more striated.”

They are now taking pre-orders from chefs and have plans to eventually make their ‘sushi-grade’ lab salmon available to consumers and not just restaurants. If you’re a chef or own a restaurant then you can hop on their waitlist right here:

We're looking to meet chefs, restaurateurs, and movers and shakers across the world of sushi. Please join our waitlist to be the first to know what's next! https://t.co/dApsuGzz5c pic.twitter.com/aJm3LMLOtM

I wouldn’t have any problem with eating this. I’d 100% try it if the opportunity presented itself. But I would have a problem paying more for this than wild-caught salmon. But I’m very much in favor of sustainable seafood and this announcement sounds like they’re moving things in the right direction:

We are thrilled to introduce the latest version of our cell-based fish: sushi-grade Coho salmon. We created this improved version with your favorite salmon rolls, nigiri, and sashimi in mind. It’s amazing on its own, and it’s incredible with a bit of soy sauce, wasabi, and pickled ginger.   Our global population is expected to reach 10 billion by the middle of this century; new demands on our existing food supply will mean that we need to create new tools to sustainably meet the food security challenges of our 21st century.

This is the promise of cellular agriculture. By growing salmon directly from salmon cells, we now have the ability to cultivate genuine salmon without relying on wild or farmed fish.

What’s more, we have the opportunity to keep what we all love about seafood on our plates – the delicious protein and Omega 3 fatty acids – without the things we’d rather leave out: mercury, microplastics, pharmaceutical compounds, and other contaminants.

Salmon did make my list of the Best Tasting Fish in the World but now I want them to do it for tuna. I get that salmon is the more popular sushi choice but there’s nothing, NOTHING, in the world of sushi that compares to a perfect piece of Toro.

For more on this, you can head over to this article on Fox News.