The 25 Best Tasting Fish In The World, A Very Unscientific Ranking 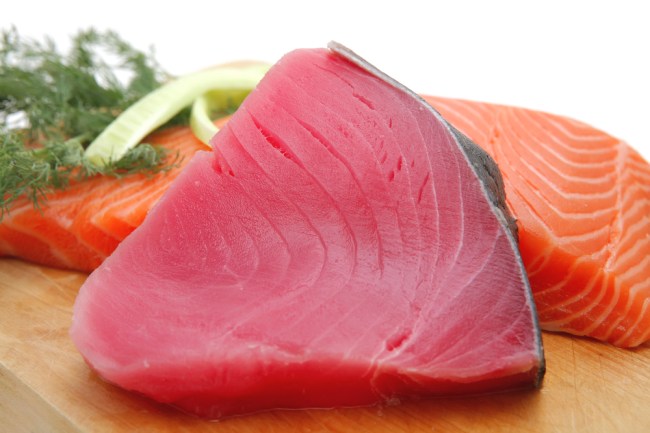 One of my coworkers asked me what I think the best tasting fish in the world is recently and I had to think about it for a minute, then realized I’m pretty torn on my top 5 but can at least narrow down my favorites to only a handful. From there a HEATED DEBATE broke out amongst the BroBible editors. Some (Rebecca) claimed that salmon is the best tasting fish in the world. Naturally I called her an idiot for liking salmon (it’s wildly overrated), and from there I went on to claim it’s a tie between a few different species, several of which she doesn’t even think tastes good (who hates Mahi Mahi?!).

Am I qualified to write these rankings? Not really, no. I grew up with a boat in Florida and spent several days a week on the water. I’ve fished all around the world. If you ask my co-workers I’m a bit of a snobby dickstick when it comes to my #foodtakes. So no, I’m not qualified to write the definitive rankings for ‘the best tasting fish in the world’ but my list is better than yours, so suck it. Now let’s get to my extremely scientific rankings…

The Best Tasting Fish In The World, Ranked

25) Rainbow Trout: This was one of the first fish I ever recall truly loving. We used to catch these in the Smokey Mountains in North Carolina when I was a kid and would cook them camping. They were goddamn delicious.

24) Haddock: If you’re a seafood lover and have ever spent any time in the Northeast then you’ve almost undoubtedly had a delicious meal involving Haddock. If you don’t like Haddock there might be something wrong with you.

23) Flounder: Not only is it one of the weirdest looking fish in the ocean it’s also one of the tastiest. The flat body lends it perfectly too cooking, just prepare it with a little lemon butter and/or fry it up and you’re in business.

22) Redfish: you’d be hard pressed to find a better tasting piece of fish than a blackened redfish. Caught from the Chesapeake Bay on down to the Florida Keys and all throughout the Caribbean, it’s one of my all time favorites.

21) Swordfish: I do genuinely like swordfish but I also think it’s one of the most overrated fish in the world. People salivate over swordfish like it’s a gift from the gods, but sometimes it’s really not all that tasty. I feel like with swordfish it’s more about the preparation. When you get a fresh swordfish steak it is pretty divine, but finding fresh swordfish these days is really, really hard to do. 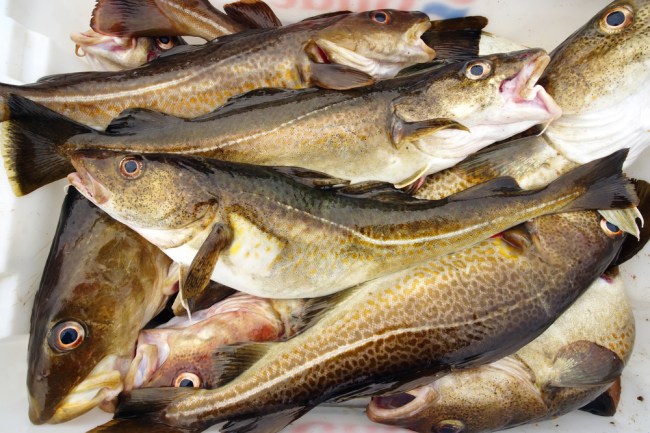 20) Cod: This is a fish that’s gotten a bad rap throughout the years due to some weird parasites that pop up from time to time. Don’t let that sway you away from ordering Cod though. I think what people tend to forget is the fish you’re ordering in a restaurant has been vetted, it’s not some bottom feeding specimen you pulled in on your buddy’s Boston Whaler, this is a restaurant-caliber fish and holy shit is Cod delicious. Don’t let Cod’s reputation dissuade you from ordering it, because it’s phenomenal.

19) Speckled Sea Trout: For a while these fish were hard to come by in parts of Florida. Due to a combination of random cold fronts and a few brutal hurricanes the speckled sea trout fishery was decimated. These fish are back now, and they’re as tasty as they’ve ever been. You can pretty much catch them on any grass flat across Florida or throughout the Gulf of Mexico, and they’ll strike anything that’s shiny and moves. Fresh fish = the best fish, so eat ’em while they’re as fresh as possible.

18) Chilean Sea Bass: Fun fact, the Chilean Sea Bass has forever been known as the ‘Patagonian Toothfish’, but apparently that name wasn’t very marketable and the fish didn’t sell much worldwide. Someone changed the name to ‘Chilean Sea Bass’ and suddenly it’s on my list of the 25 best tasting fish in the world, and people have eaten so much of this fish that it’s now on the protected species list.

17) Salmon: To me this is the most overrated fish of all. As I’ve stated before the best fish is whatever’s freshest, and if you can get fresh salmon (Pacific Northwest on up) it’s tasty as hell. For the most part though salmon is farmed, it’s oily, and it’s just not very good. If you’re deeply into salmon it’s simply because you haven’t tasted enough other fish yet to know what you actually like.

16) Yellowtail: A lot of people think they dislike yellowtail but that’s because in sushi restaurants worldwide yellowtail is one of the most commonly misrepresented fish on the menu. Actual yellowtail caught from the cool waters of California is fucking delicious, and it’s also a fish that fights like hell so if you catch it yourself it tastes even better because you feel like you’ve truly earned that fish. 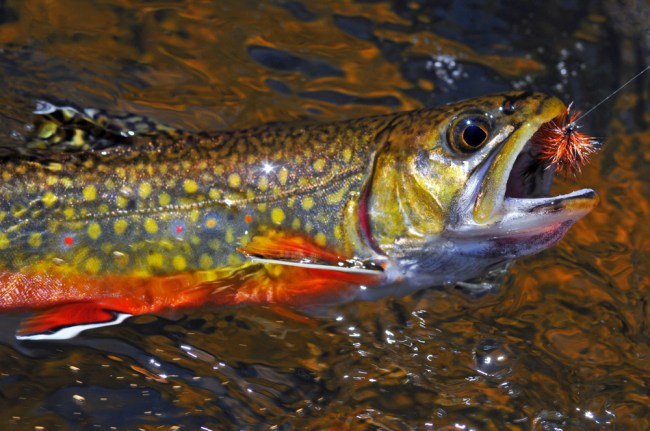 15) Catfish: Blackened or fried, this is one of the best tasting fish worldwide BUT ONLY when it’s prepared by someone who knows how to season and cook it properly. If you don’t like catfish then I’m guessing you’ve never had it done right.

14) Blue Marlin: I didn’t want to include this on my list only because I don’t actively support the killing of billfish. I have however eaten fresh blue marlin after one (of 3) we caught out of Los Sueños Marina in Costa Rica died after a 90-minute fight. The mates filleted it there and it was probably top 3 pieces of fish I’ve ever eaten in my life. It would be lower on the list if there were more blue marlin in the ocean, but they really shouldn’t be taken (and subsequently eaten) unless the fish died in battle.

13) Kingfish: Smoked or blackened is how I prefer my Kingfish, and honestly I wanted to put Kingfish ranked lower on this list but there’s some serious heavyweights below that I just couldn’t bump. When the Fall and Spring Kingfish runs happen throughout the Southeast you can find super fresh Kingfish and I suggest buying and eating it in bulk.

12) Halibut: The Halibut isn’t much to look at but holy shit snacks is delectable. I discovered Halibut way too late in life and I’ve been making up for lost time in the past few years. I’ve yet to taste a single bad bite of Halibut, nor have I found a bad way to prepare it.

11) Brook Trout: For my money this is the best tasting freshwater fish on planet earth, it’s also probably the most beautiful freshwater fish. Really there’s not a single bad thing anyone can say about Brook Trout. Season it with some lemon and go to down. 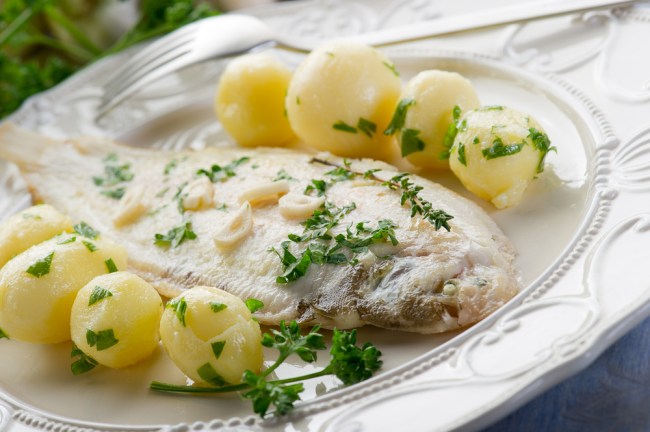 10) Amberjack: The ol’ reef donkey. Amberjack’s certainly not as popular as the other fish on this list but it really should be. If you’ve never had an AJ for yourself I want you to make eating Amberjack your 2016 New Year’s Resolution, just make sure it’s as fresh as possible.

9) Blackfin Tuna: This is probably the most overlooked tuna in the ocean, but Blackfin Tuna is a fish that’s near and dear to my heart…mainly because after decades of trying I still haven’t caught one. This is the one that whenever we go out fishing everybody on the boat catches a Blackfin Tuna but me. Therefore whenever I eat Blackfin Tuna I stew over my failures, wondering why in the shit I just can’t catch this football-sized delicious fatty tuna.

8) Dover Sole: The steakhouse fish. If I go to a quality steakhouse and this isn’t the fish on the menu I’m usually a little skeptical. It’s expensive as hell, and therefore it’s not really a value fish (relatively speaking you could probably get lots of flavor for less $$$ from another fish), but that doesn’t mean it’s worth passing over. The last Dover Sole I had was at Carbone here in NYC (in Greenwich Village), and it was so expertly prepared that I found myself eating every last morsel of the fish skin, which is something I never do. Dover Sole, do it. Do it.

7) Yellowfin Tuna: The ONLY wrong way you can cook this fish is to fry it. Eat it raw, sear it, thinly slice it and cover it with a little soy sauce and this is one of the most exquisite tasting fishes in the world.

6) Red Snapper: I considered combining Mangrove Snapper and Red Snapper together, because I probably love both equally, but the Red Snapper’s the kind of the snapper world, the one that everybody knows and loves. When caught and eaten fresh the Red Snapper is exquisite. Toss in a little lemon, some spice, and the fish does the rest of the work. 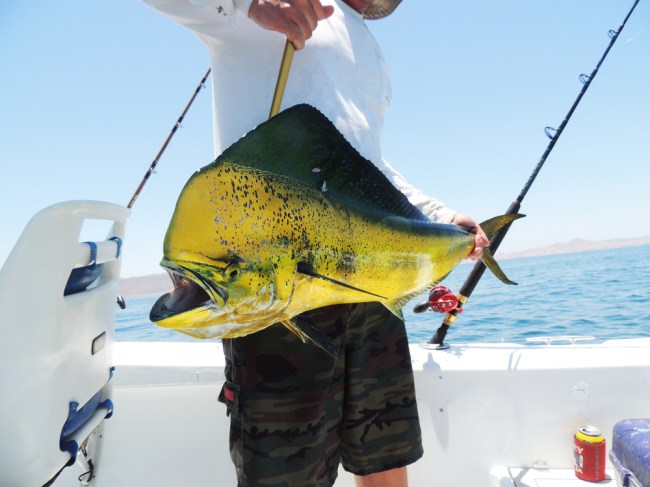 4) (tie) Mahi Mahi: Dolphin, Dorado, Mahi Mahi…This fish has a ton of names. It’s also a very commonly mislabeled fish at restaurants and grocery stores, so people can think they’re eating mahi mahi when in reality it’s some no name fish from the Indian Ocean. Mahi Mahi’s often called the fastest growing fish in the ocean, so you should never feel guilty about eating as much of it as you want because there’s always another delicious dorado in the making.

4) (tie) Wahoo: If you’ve never had fresh wahoo I simply cannot overstate how delicious it is. You might know this fish as ‘Ono’ depending on where you live in the world, that’s what the Hawaiians refer to it as. It’s one of the fastest fish in the ocean and depending on how your prepare it it’s quite possible the most delicious.

3) Grouper: Gag Grouper, Black Grouper, Red Grouper, White Grouper, Nassau Grouper, Snowy Grouper…I could keep going but all I need to say is GROUPER IS THE BEST FISH FOR A FRIED FISH SANDWICH IN THE ENTIRE WORLD. Fresh blackened grouper on the grill is phenomenal, but nothing in the world of fried food can top a good fried grouper sandwich.

2) Hogfish Snapper: I do not possess the necessary vocabulary to adequately express how fucking delicious whole Hogfish Snapper is when it’s prepared correctly. If I were on death row and could request my final meal it’d be fried whole Hogfish Snapper (probably prepared by S.A.L.T. Fusion Cuisine in Islamorada). The Hogfish is amongst the most iconic fish in the state of Florida, and one of the most sought after in the world.

1) Bluefin Tuna: There were a few years of my life (recently) when I was staunchly against eating Bluefin Tuna. It’s a fish that’s been exploited by commercial fisherman and at one point it was on the verge of a complete species collapse. Well, it’s rebounding (slowly), and I’ve become more open to eating the most exquisite fish in the ocean. Not too long ago I had a piece of Bluefin Tuna sushi at Sushi Nakazawa in NYC’s West Village (the same Nakazawa from Jiro Dreams of Sushi on Netflix), and I swear to God I didn’t want to chew because the tuna in my mouth was so good I was worried I’d never taste anything that delicious again for the rest of my life. That’s how good Bluefin Tuna can be, so good you don’t even want to chew (which is disgusting in any other situation).