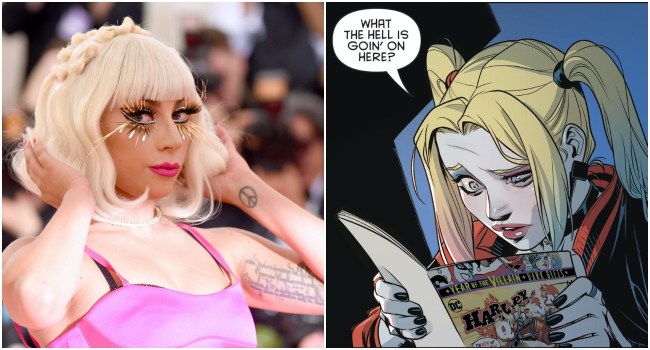 According to The Hollywood Reporter, Lady Gaga is in “early talks” tp star as Harley Quinn — Joker’s famed love interest — in the upcoming sequel to Joker, which sees Todd Philips return to direct and Joaquin Phoenix returning to play the titular Clown Prince of Crime.

Details on her character are being kept under wraps, but Joker is known for his on-off abusive relationship with Harley Quinn, his psychiatrist at the mental institution known as Arkham Asylum who falls in love with him and becomes his sidekick and partner in crime.

It is unclear whether Phillips and company are using other DC characters or striking on their own, as they did in many instances with their first movie. [via The Hollywood Reporter]

To make matters even crazier, reports indicate that the sequel to 2019’s Oscar-nominated, billion-dollar-grossing Joker will be a musical.

Love the casting…love Gaga…the musical is an odd way to go…but I like musicals lol so I'm in!! https://t.co/4qM8jm210L

Wow talk about a twist. Not the casting.. but the type of film this is apparently going to be. https://t.co/cDjDoROOc8

Things just got interesting. Especially with the musical part. https://t.co/HwtLAiFSh1

Wait I love this https://t.co/le7UAGFU73

Once it was announced that the Joker sequel was subtitled “Folie à deux” — which is French for “madness for two” — fans immediately began to speculate that Harley Quinn could appear in the film.

Quinn, who was first introduced in the 1990’s cartoon Batman: The Animated Series, is also currently portrayed by Margot Robbie in the DCEU, having most recently starred in the role in 2021’s The Suicide Squad.

At this time, while the Joker sequel does not have an official release date, given that the cast is beginning to come together, the film is likely on track for a late 2023 or early 2024 release.