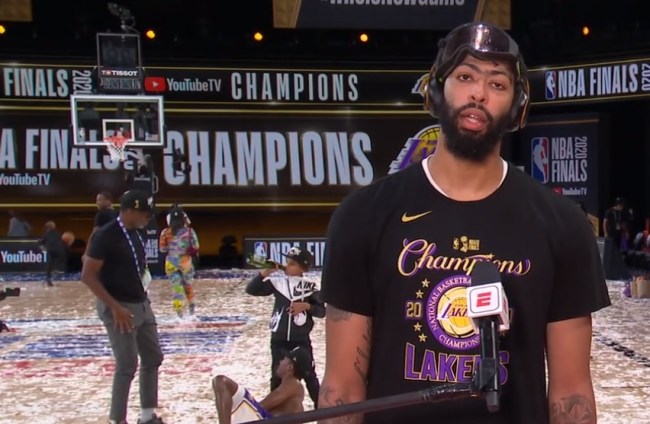 The LA Lakers won their 17th NBA championship and everyone inside the bubble was partying including Rajon Rondo’s son.

After beating the Heat, the Lakers made their way to the locker room to celebrate with bottles of champagne.

The celebration spilled over towards the court and the young son of Rajon Rondo appeared like he was trying to get a sip of whatever was left inside of his dad’s bottle.

Rajon Rondo Jr. was then immortalized in a picture taken by ESPN.

Rondo and his son soaking it in ❤🏆 pic.twitter.com/H2LIuRmwTw

NBA fans had jokes about Rondo’s son trying to take a sip of his dad’s bottle.

Rondo’s son mans the bottle better than 99% of the people in a club at any given moment. pic.twitter.com/tLvud45L8a

I think Rajon Rondo’s son has been spending to much time with Jr Smith on the bench pic.twitter.com/aSn1t4XZCh

How old is rondo son ? 👀🤣 shawdy drinking on the champagne bottle 😭😭 https://t.co/UqNtQ2doRG

If I was Rondo this would be my profile pic, Christmas card, mixtape cover, everything pic.twitter.com/CwOeZl7AvO