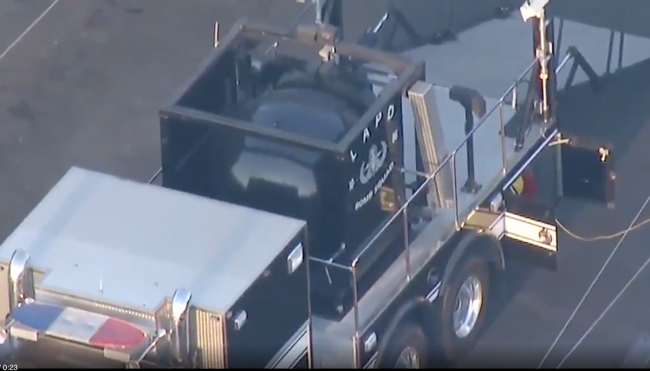 One of my favorite Fourth of July traditions is capping off my night on the East Coast by tracking down a live feed of the festivities in Los Angeles, as many of the city’s residents could not care less about the pesky regulations prohibiting them from honoring America by launching fireworks into the sky.

Sky5 got a look at fireworks lighting up the skies for Fourth of July pic.twitter.com/nkFNUh4N8O

Those laws do exist for a reason, but they ultimately exist to highlight the pitfalls of the concept of prohibition, as people are either forced to resort to smuggling fireworks into the city or playing amateur pyrotechnician by cobbling together their own awe-inducing explosives.

According to CBS2, a 27-year-old man opted to harness both of those strategies and subsequently found law enforcement descending on his home in South Central in search of the 5,000 pounds of illegal fireworks and the homemade incendiary devices the were seized by members of the Los Angeles Police Department and ATF on Wednesday.

An LAPD bomb truck was eventually called onto the scene to conduct a controlled explosion of some of the fireworks that were confiscated. However, it’s safe to say things did not go as planned based on these insane videos of the vehicle being destroyed in a massive blast.

LAPD made a slight booboo whilst transporting seized fireworks. pic.twitter.com/iXpRwtEJvE

WATCH: Sky9 was overhead when police attempted to detonate a stash of illegal fireworks that ended in an explosion in the 700 block of East 27th Street in South L.A. https://t.co/KpWiAEoyqv pic.twitter.com/UbIXLDoZjh

17 people were injured as a result of the incident, which sent the top of the bomb disposal container skyrocketing into the air before hitting a roof of the house where it landed—which was located two blocks from the site of the explosion.

Shocking new detail on today’s fireworks detonation gone awry: LAPD thinks the top of that armored container device flew TWO BLOCKS to the East, smashing part of a roof before hitting the dirt. The top of that device reportedly weights as much as one TON (center of pic) @CBSLA pic.twitter.com/uss3l1Z2fH