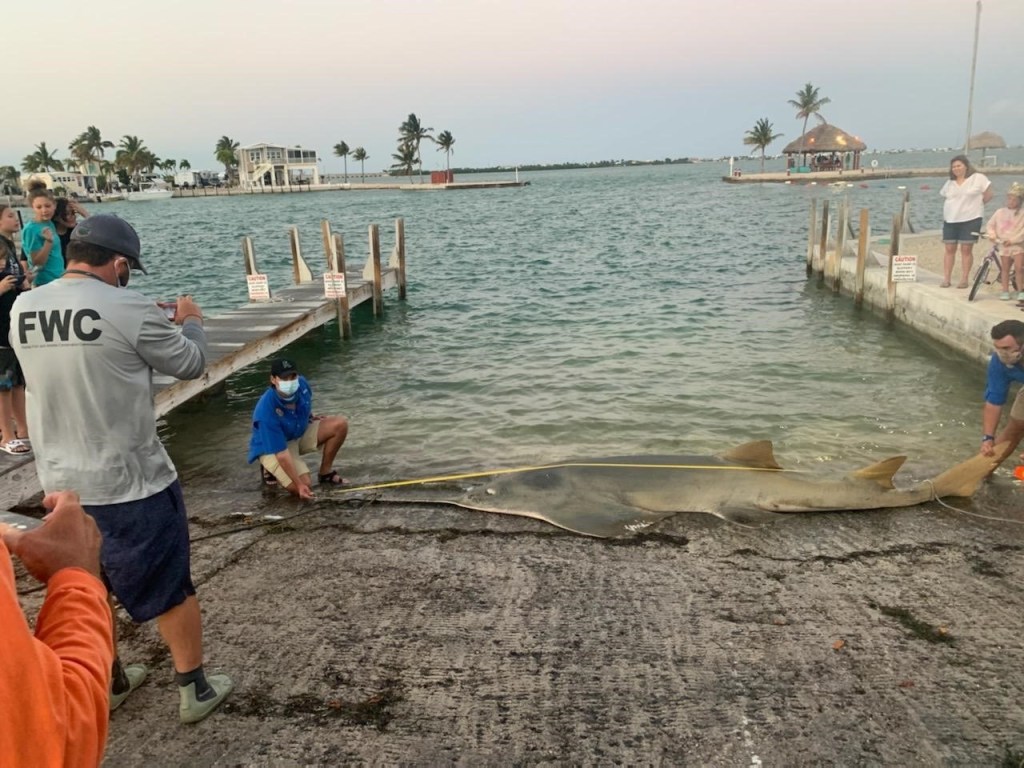 The largest sawfish ever measured by scientists was recorded in The Florida Keys last week, along with another massive sawfish, after the two species washed up dead on nearby beaches. While it is quite tragic that the largest-ever sawfish measured by scientists appeared already dead and with ‘softball sized eggs’ in her stomach, it’s also a remarkable finding and the DNA can now be studied.

Sawfish are some of the rarest creatures in Florida waters and they grow to the size of literal dinosaurs. I was born and raised in Florida and never seen one in the wild. The only place I’ve ever seen them is in aquariums or, sadly, on the walls at restaurants dating back to when fishermen still harvested sawfish for their unique bills that look like saws.

I saw reports of the world record sawfish last week but at the time I assumed it was killed by some idiot fisherman, but there aren’t any indications that I’ve seen regarding the cause of death. Here’s the report from LiveScience:

The record-breaking sawfish was one of two dead sawfish that washed ashore in the Keys last week, one near Cudjoe Key and the other near Marvin Key. They were found far enough apart that the timing of their deaths is most likely coincidental, Poulakis told Live Science.

The 16-foot-long (4.9 meters) sharp-snouted fish was a mature female with eggs the size of softballs found in her reproductive tract. Scientists are now studying her carcass to determine her age and to learn more about her reproductive past.

“Although it’s a sad occurrence when a big animal like that dies, from a scientific standpoint we knew we could learn a lot from it,” said Gregg Poulakis, a fish biologist at the Florida Fish and Wildlife Conservation Commission. “That makes us feel a little bit better about having lost such a big female.”(via LiveScience)

WC sawfish biologists responded to sawfish hotline reports of two large smalltooth sawfish that died in the Florida Keys this week. One was a mature 16-foot female that weighed an estimated 800-1000 pounds and the other was an immature female 12 feet, 4 inches long and weighed an estimated 400-500 pounds. The 16-foot sawfish (pictured) is the longest measured by scientists since research began on the species. There was no obvious cause of death for either sawfish; however, valuable life history information was and will continue to be collected from both carcasses due to the swift response from Keys-based FWC staff and MCSO – Florida Keys to secure the carcass for study. Sawfish biologists are working to learn as much as possible from samples they collected. For example, the vertebrae will be used to determine the ages of both sawfish, the DNA will be sequenced to compare to other sawfish that have been studied throughout Florida, and the length at maturity for females will be fine-tuned based on these data.

Since 2003, the Florida Fish and Wildlife Conservation Commission has been tracking endangered sawfish and up until this 16-footer the largest one they’d measured was one measuring 14 feet (4.7 m) long and it was estimated at 14 years old. The smaller of the two dead sawfish found in The Keys measured 12-feet-4-inches and was still a juvenile.

If you’ve ever wondered what it’s like to catch a sawfish while fishing, here’s a glimpse of what reeling in a ‘mud marlin’ is like:

I’m going fishing this weekend with Capt. Jimmy of Everglades Fishing Co. out of Everglades City and he’s got some wild stories about seeing groups of these sawfish all huddled up on barrier islands which is something I’d kill to see one day. So here’s to hoping that maybe this is the weekend I see one.