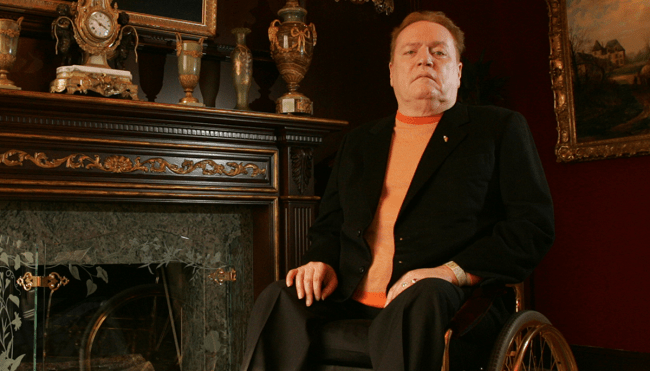 Hugh Hefner deservedly gets the bulk of the credit for helping to bring some of the more sordid elements of society out of the shadows by adding a veneer of glamour and sophistication that helped him make controversial topics become increasingly mainstream. However, any true smut aficionado knows you can’t also overlook the contributions of Larry Flynt.

The man who founded Hustler magazine was well aware people were not reading his publication for the articles, as Flynt eschewed the glitz and class that defined Playboy in favor of hardcore, no-holds-bar approach to the controversial content that landed him in court on multiple occasions.

That included an obscenity trial that brought him to Georgia in 1978, which is when he was shot by a man who was not thrilled with his decision to run an interracial shoot in an issue of Hustler. Flynt was paralyzed as a result of the incident, and while he was confined to a wheelchair for the rest of his life, the fiery free speech advocate never lost his fighting spirit.

Flynt also found himself being forced to answer to the Supreme Court on multiple occasions—including one case where he was arrested for contempt of court as the result of an outburst where he labeled Sandra Day O’Connor a derogatory term that rhymes with “bunt.” However, according to FBI documents recently obtained by Vice, that blow-up had nothing on his alleged plans to literally blow up the Supreme Court with a suicide bomb strapped to his wheelchair.

The outlet got its hands on a 322-page dossier the agency compiled prior to Flynt’s death earlier this year, which is filled with plenty of wild revelations. However, nothing comes close to topping conversations he had with two men concerning a plan to pull a Hector Salamanca from Breaking Bad by rolling into a Supreme Court hearing in 1983 on a wheelchair filled with C-4.

Things fell apart after his potential partners in crime refused to get on board, and while prosecutors apparently debated charging him over the conspiracy, they ultimately decided against it after concluding he was never serious about carrying out the attack.