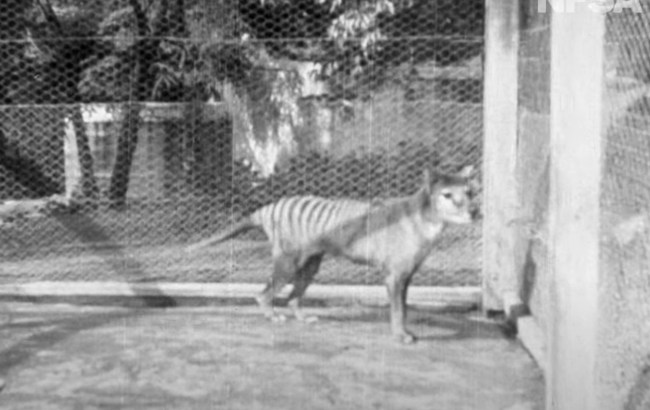 Image Courtesy of National Film and Sound Archive of Australia

A newly unearthed clip from the National Film and Sound Archive of Australia (NFSA) that dates back to 1935 shows the last living Thylacine, or Tasmanian Tiger, ever filmed.

I feel a bit conflicted about this clip because on the one hand, it’s extremely tragic that we’re witnessing footage of the last living member of a species but on the other hand, it is quite fascinating to see a creature that hasn’t been around in almost a hundred years.

The 21-second clip that was filmed in 1935 that was taken from Tasmania The Wonderland has been digitized in 4K and the NFSA says this is the last known footage of the now-extinct Thylacine. The Tasmanian Tiger seen here was named Benjamin and he passed away in 1936 but this is known to be the last time Benjamin (the last living Thylacine) was filmed.

According to the NFSA’s press release, this clip has remained unseen for 85 years. At one point in the footage, there are two people rattling the cage in an attempt to get him to roar, or ‘threat yawn’ as they call it. Here’s the clip:

” [The Tasmanian Tiger] is now very rare, being forced out of its natural habitat by the march of civilization,” says the film’s narrator.

Benjamin was the last known surviving thylacine in captivity; the London Zoo’s specimen had passed away in 1931. Benjamin was acquired by Hobart’s Beaumaris Zoo in 1931 and passed away on 7 September 1936, a day which is now commemorated as National Threatened Species Day.

The most recently confirmed footage of Benjamin was filmed in December 1933, making this 1935 clip the last known moving images of a thylacine. (via)

There are less than one dozen surviving films of the Thylacine in the world which makes every second of this footage significant. All of the footage that does exist is in black and white as there are no color photographs of the Thylacine nor is there any audio recordings of what they sounded like.

For a full rundown fo the NFSA press release on this unearthed footage, you can click here to visit their website.