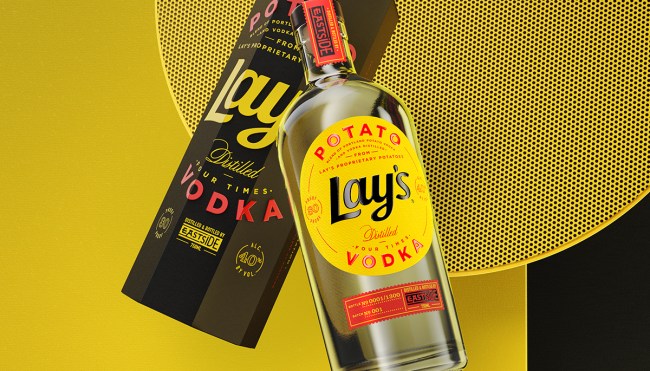 In November, Arby’s treated the world to the latest installment of Brands Gone Wild when it revealed it had teamed up with a distillery in Minnesota for a vodka inspired by the chain’s crinkle and curly fries.

Based on how quickly the limited run of bottles sold out after they dropped, it seems like the stunt worked out pretty well for Arby’s. The fast food giant was also kind enough to send some samples my way, and while it was certainly a solid vodka, I feel like anyone who spent $60 to secure a fifth probably ended up being a tad disappointed based on the fairly subtle nature of the flavors that were promised.

Now, it might be a bit early to announce we have a Full-Fledged Trend on our hands, but on Thursday, Lay’s revealed it has also decided to get in on the action with the release of its own vodka made with the spuds the snack food giant uses for its potato chips.

The spirit was created with the help of Eastside Distilling in Portland, Oregon, which blended its potato vodka with a small-batch run that was whipped up with Lay’s proprietary taters. If your interest is piqued enough to drop $40 on a bottle, you can try to snag one here, but if you’re looking for a bit more intel before pulling the trigger, the folks at Lay’s were kind enough to send some my way so I could give it a try and share my thoughts with the world. 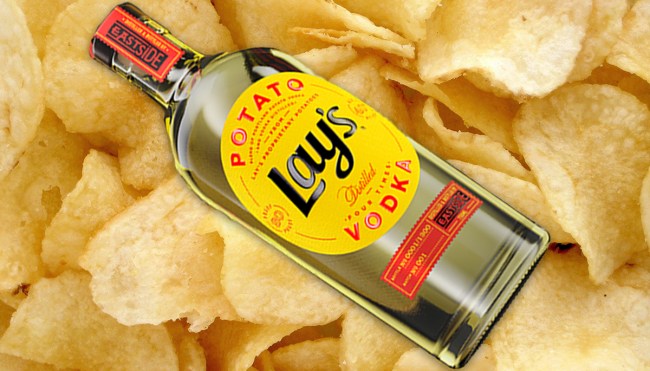 While $40 is a bargain compared to the hefty price tag Arby’s slapped on its vodka, it’s still a fairly pretty penny to pay for a 750 ml bottle. As a result, I’ll admit I was somewhat skeptical once I popped open the top to pour myself a sample, as the fairly boozy smell that greeted me wasn’t exactly aligned with the “odorless” box premium products in this category are supposed to check.

With that said, it was by no means overwhelming (especially compared to the hair-curling smell that greets you when you take a whiff of stuff traditionally stored on the lower shelves at a liquor store), and it also boasts an almost buttery essence that takes center stage when you sniff it a few times.

Of course, vodka is meant to be drunk, not smelled, so I did exactly that. I was pleasantly surprised by the flavor that lives up to the “clean, crisp” promise, and while the 80 proof spirit may lack the somewhat gimmicky flavors that Arby’s relied on, I think Lay’s walks away with the win here because it didn’t try to dress the vodka up more than it needed to be (especially when you take the lower price tag into consideration).