LeSean McCoy, Tua Tagovailoa Reveal How They Spent Their First $1 Million (Many Cars Were Involved) 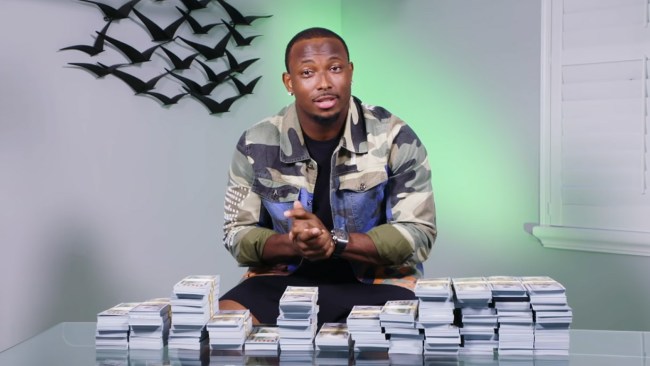 Running back LeSean McCoy appears to have made a very wise decision when he signed with the Tampa Bay Buccaneers this past offseason.

All in all, over his 12 seasons as a pro, McCoy has earned over $63 million playing for the Eagles, Bills, Chiefs and Buccaneers.

His rookie contract with Philadelphia saw him receive around $1.9 million in his first year after being drafted in the second round out of the University of Pittsburgh.

Based on what McCoy tells the folks over at GQ this month, that first season’s money didn’t last very long as he explains exactly how he spent his first million dollars.

Not that he spent all of it poorly.

“So when I started becoming a really, really good player, I started getting a lot more endorsement deals,” said McCoy. “So you’re getting all these different small checks, you do appearances, you walk in there for an hour you get $20,000, $25,000, so I didn’t have to cut into my playing money as much. Never touching the guaranteed money, your salary is something that is permanent. My advisor has that, right, let’s put away.”

McCoy then gets to, as he calls it, “the good stuff” – how he spent his first million dollars.

“I threw my draft party, and that cost some money, so about 50 grand I mean. Before I even get to the NFL, $50,000 on my draft party,” McCoy revealed. “I had DJ Drama, he’s a [chuckles] very famous DJ, and I had him come out. Pay DJ Drama, I had to pay for the venue, we had to pay for the alcohol, like the props, we rented a car, I think I pulled up in a Maybach, the cameraman he gotta get paid, the flyer people, people to get the flyers, we paid for the radio.”

His next big purchase was “a big ol’ NFL chain” that cost $35,000 (and eventually got stolen while partying in Miami) and a Breitling watch that cost $20,000.

Related: Washington Redskins QB Dwayne Haskins Shares How He Spent First Million After Making It To The NFL

He also had to drop $10K on a “rookie dinner” in Atlantic City that guys like Donovan McNabb and Brian Westbrook forced him to pay for, spent another $20K on a trip to Vegas with his friends, and an additional $100,000 on new clothes for himself, his friends, and various dates.

“I didn’t do too bad, but I ain’t do too good,” he said after he was done. “As I look at all this money, this million dollars that I spent in my first years, it’s tough to look at, it really is.”

Interestingly, Tua Tagovailoa, who said he plans to save his entire $30 million rookie contract and will live off the money he makes from endorsements, also recently shared, back in September before he’d even played a snap in the NFL, how he spent his first $1 million.