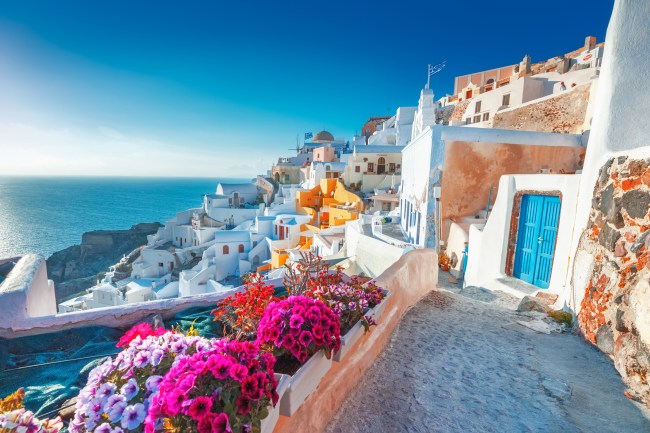 There is an entire group of people in the world who are out there right now chasing passport stamps. I’ve known they existed for years but hadn’t seen it firsthand until I visited Andorra last January, an extremely tiny country wedged between Spain and France, and witnessed a few people who were simply there to check another country ‘off their list’ and get that passport stamp.

I presume the ultimate goal here is to visit as many countries as possible. Visiting every country in the world can often be a difficult task due to war-torn regions and countries changing due to conflict. Getting visas for safe travel to certain countries can also be nearly impossible at times (looking at you, North Korea). But, intrepid travelers can pull it off with some elbow grease…and bribes, the bribes help sometimes.

The previous world record for the youngest person to visit every country in the world was held by (then) 24-year-old James Asquith from the UK who visited all 196 sovereign countries in the world in just 24 years and 192 days. He finished this quest on August 12, 2013.

On May 30th, 21-year-old American Lexie Alford visited North Korea as her final country and shaved three years off James Asquith’s Guinness World Record. She’d been checking off countries since an early age because her family owned a travel agency in California. However, there is one small snag, Alford is yet to have her record confirmed by Guinness. Which we know is a big deal (or at least it is to James, since his “people” contacted us to make the correction).

According to Forbes, Lexie didn’t grow up wanting to break the world record but she became increasingly inspired by her travels to show people that the world isn’t as scary as the global media makes it out to be:

While she was growing up, Alford says that her family traveled everywhere from the floating villages of Cambodia to the Burj Khalifa in Dubai, from Ushuaia at the tip of Argentina to the Great Pyramids of Giza in Egypt. “My parents placed a lot of importance on exposing me to every way of life around the world and that had a very profound impact on the person I am today,” she says. “I’ve always had a curiosity about other people’s ways of life and how they find happiness.”

Alford said she originally wasn’t trying to break a record; she was just an intrepid traveler. “Honestly, in the beginning, I simply wanted to push the limits of what I thought I could do with my life and see as much of the world as possible in the process,” says Alford. “It wasn’t until things started getting really challenging that I realized I was inspiring people around me, especially young women. Feeling that support meant that I couldn’t give up when things got tough. I was determined to show everyone that the world isn’t as scary as the media portrays it to be and that there’s kindness everywhere.” (via)

Upon turning 18-years-old, Lexie realized that she’d already visited 72 out of the 196 sovereign countries in the world. That’s when she got serious about trying to set the world record. How exactly does someone pay for an adventure like this? It’s exactly what you’d expect from an entrepreneurial millennial:

Alford says that her travels are self-funded. She has done a few brand deals and campaigns along the way that helped fund her project, but she’s never had an official sponsorship. “I always knew I wanted to take time off to travel so I’ve been working every job I could find and saving since I was 12-years-old,” says Alford.
The amount she saved kept her going for the first year and a half of her travels. From there, she’s been working as a travel consultant in her family’s agency when she’s at home in Nevada City, California and also doing photography and blogging while she’s traveling. “I do a lot of research in advance to find the best deals, utilize points and miles for my flights, stay in cheap accommodation like hostels or create content for hotels in exchange for accommodation,” says Alford. “I’ve also made sure to keep my monthly overhead as low as possible by living at home with my parents, I don’t have a car payment or student debt and I don’t spend my money on unnecessary material possessions.” (via)

Step 1) Stay living at home with your parents for as long as possible.
Step 2) Build up an Instagram account and get brands to pay for your trips.
Step 3) Don’t spend money on material possessions when your ultimate goal is to travel.
Step 4) See Step 2, the most important step.

I started writing down a list of all the countries I’ve visited in the world and it came out to 20…which is barely 1/10th the amount of traveling this 21-year-old has done.

And here’s Lexie in Mauritius:

Visiting every country in the world just isn’t in the cards for me. I’m not interested in spending that much time on a plane. I would, however, like to visit every country in The Americas at some point, and Europe after that. Baby steps. Asia just seems way too fucking far. If I’m planning trip to Asia I feel like I need to carve out at least 6 months to do it right and I don’t foresee having that much free time at any point in my life.

If you’re interested in pulling off this feat yourself, Lexie said the trickiest visas were in West and Central Africa. You can follow her Instagram where she gives daily travel updates. And for more on her story, you can visit Forbes.