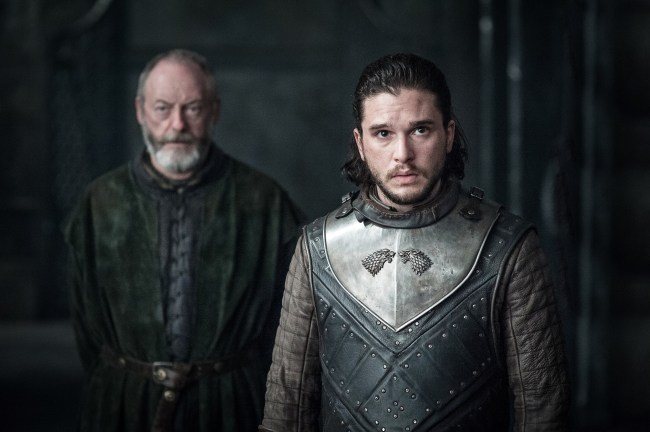 Two little words. Two little words is what the final Game of Thrones season will be driven by according actor Liam Cunningham who plays Ser Davos Seaworth. In a new interview, the Game of Thrones actor gave some grim predictions for every character in the ending of the massively popular HBO TV series that comes to a close this year.

Cunningham explained why the show is ending after only eight seasons when it seems like they could have extended the show for years to come. “One of the reasons this show isn’t going to be dragged out like other shows is because it’s incredibly difficult, you need the perfect storm,” Ser Davos said. “The quality of the writing, you can’t make that a thing that just continues, it has to have a lifespan.”

Cunningham echoed the overwhelming approval by HBO chief Richard Plepler, “I can also repeat what the head of HBO said. He’s seen the six episodes twice and said it’s like watching six movies.”

A few weeks ago, Plepler gave highly positive feedback about the last season. “It’s a spectacle. The guys have done six movies. The reaction I had while watching them was, ‘I’m watching a movie,’“ Plepler told Variety. Pepler then applauded showrunners David Benioff and D.B. Weiss by saying, “They knew the bar was high. They’ve exceeded the bar. I’ve watched them twice without any CGI and I’m in awe. Everybody’s in for an extraordinary treat of storytelling and of magical, magical production.”

The Late Late Show Ryan Tubridy commended Cunningham for making it all the way to Season 8 of Game of Thrones, “Congratulations for staying in the picture because there’s death all around you.” Cunningham replied, “So far, so far. That doesn’t mean anything. We’re all going to die. Don’t forget ‘valar morghulis’ which is one of the phrases on the show which means ‘all men must die.'”

That’s quite a bleak fate for the final season of Game of Thrones. If you take Cunningham literally and at his words, does that mean that everyone will die? Does that mean the Night King’s Army of the Dead will prevail? Are White Walkers classified as men? If so does that mean that the dragons will kill everyone and they rule over Westeros? So many questions going into the last season of Game of Thrones. But we only have to wait 83 days, nine hours, and 37 minutes until Season 8 erupts onto our screens when the show debuts on April 14th!