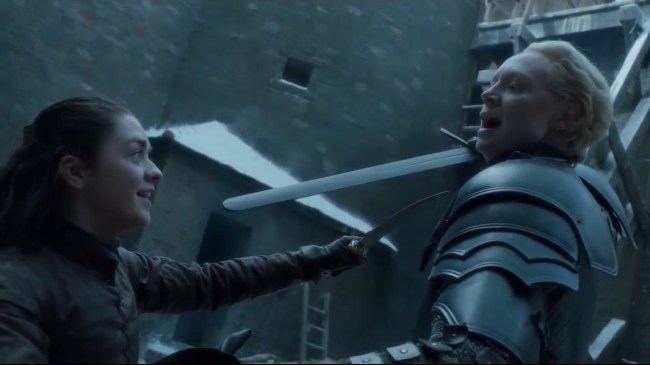 Arya is committed to her precious kill list, that’s why she recites the names of her upcoming victims every night before she goes to bed. Commitment. She has already gotten revenge for the deaths of her mother and brother Robb, now it’s time to avenge her father’s murder. King Joffrey is already dead, so that leaves his mother — Cersei Lannister, who has been on her kill list since Season 1. Could Arya steal Jaime’s face to gain access to the Kings Landing and the Red Keep, then arrange a meeting with Cersei because she can’t pass up a chance to see her brother/lover/baby daddy. Cersei would shoo away The Mountain to have some private time with her “brother.” Then Arya appearing to be Jaime kills Cersei. The Kingslayer could also be The Queenslayer.

.@Maisie_Williams promises we will get to see Arya Stark kill a few more people in the final season of @GameOfThrones. That's the only thing I've heard on the final season during the panel at #CCXP2018 pic.twitter.com/K51gHENwwt

More evidence to this fan theory is that Melisandre delivered a prophecy when she met Arya in the Riverlands. “I see a darkness in you,” Melisandre tells Arya. “And in that darkness, eyes staring back at me. Brown eyes, blue eyes, green eyes. Eyes you’ll shut forever. We will meet again.” Game of Thrones fans suggest that the green eyes that Arya shuts are Cersei’s green eyes, which are pointed out several times in the George R.R. Martin’s A Song of Ice and Fire books.

Arya Sits On The Iron Throne

In October, Maisie Williams gave an interview to the Guardian teased that Arya’s final scene was “beautiful.” Williams added, “I ended on the perfect scene. I was alone – shocker! Arya’s always bloody alone. But I was alone and I had watched a lot of other people wrap. I knew the drill, I had seen the tears and heard the speeches.” Arya was alone? Alone like everyone else is dead and she is left to rule Westeros?

In an Instagram post from July, Maisie Williams posted a photo of her shoes that were extremely bloody. The pic had the caption: “goodbye belfast. goodbye arya. goodbye game of thrones. what a joy i’ve had. here’s to the adventures to come #lastwomanstanding #barely.” “Last woman standing?” Who’s blood is that? Did she kill all the other female characters?

RELATED: ‘Game Of Thrones’ Fan Theory Explains Why And How Jaime Lannister Will Be The One To Defeat The Night King

Arya Goes On A Faraway Adventure

Redditor Aeiexgjhyoun_III has a fan theory that Arya Stark is going to explore strange lands far, far away. “So while laying sick in bed at that actress’ house Arya claimed she wanted to go beyond the shadowlands and explore uncharted waters,” the Redditor wrote. “Secondly Arya named her wolf Nymeria, who was a princess that sailed across the seas searching for a new home for her people. Arya is not interested in being a lady and while some are theorizing that she’ll settle down with Gendry I find that unlikely. Arya is going to leave Westeros and explore the regions beyond the map.”

Arya has never shied away from a fight, even when her opponent was bigger and stronger. What if this time she bites off way more than she can chew. Another valid reason is Valar morghulis.

Arya and Gendry became good friends the moment they met. But now they both are realizing their full potentials and are much stronger than they were when they first met. The blacksmith from King’s Landing is now fighting alongside Jon Snow. Plus they are both from esteemed families, Arya from House Stark and Gendry is the bastard son of King Robert Baratheon, which gives him a possible claim to the Iron Throne. Not to mention that Arya seemed to have a crush on Gendry.

Joe Dempsie, who plays Gendry in Game of Thrones, gave an interview to The Hollywood Reporter in August of 2017. When asked about a reunion between his character and Arya he said, “I would love it. Just purely because I love hanging out with and working with Maisie. I said years ago when we were shooting the show is that she’s one of the best actors I’ve worked with. She’s a phenomenal talent.” Dempsie added, “I would love to see Gendry and Arya meet again. They seemed to get on. It was a nice banter between the two of them. It would be great to revisit that.”

When asked about a possible romantic relationship between Gendry and Arya, Dempsie said, “I think it’s implied in the books that there might be a romantic element to the relationship, and in the books I think the characters are significantly closer in age. I know from my personal experience, when we were filming the earlier seasons and people would ask about that and talk about that, I would feel slightly uncomfortable. I’m acting alongside a child here. I was a 25-year-old man. I sometimes found that question a little hard to address and a little tricky to answer. As a result of the difference in age, I think one of the roles Gendry played in Arya’s story was as him being an older guy who sort of awakens certain feelings in Arya for the first time as she’s becoming a young woman. There’s that scene in season two where I’m forging a sword — fairly inexplicably without a shirt on — and I think the idea was to convey the idea of Arya experiencing feelings she’s never felt before. Everyone’s had that at some point. Whether that means Gendry has a place in Arya’s heart or vice versa, I have no idea. I think there’s almost a sibling element, too. At that point in the story, Gendry really reminded her of her brothers and of home. That was the comfort with him. But it could go a number of ways. It would just be nice if they met again, wouldn’t it? It’s a pairing you wouldn’t want to mess with.”

In Episode 5 of Season 3, before Gendry leaves for Dragonstone, Arya tells him, “I could be your family.” Then Gendry replies, “You wouldn’t be my family, you’d be M’Lady.”

Then there is the outrageous theory that Arya is already dead. Instead of Arya stealing faces, this fan theory says that it is the Waif stealing Arya’s face. In the final encounter between the Waif and Arya in Bravos, it is assumed that Arya killed the Waif because she had become a pro at fighting in the darkness after she was blind for a while. But what if the Waif won, took Arya’s face, pretended to be her, and placed another face in the Wall of Faces.

Arya had been acting out of character up until the fight scene. Then there are the times that Arya uses her right hand despite her left hand being the dominant hand. This theory doesn’t make any sense because Jaqen H’ghar wouldn’t be fooled by a stolen face. Another reason this doesn’t make any sense is that Arya went and killed Walder Frey out of revenge for the Stark deaths from the Red Wedding.

No matter what happens to Arya Stark in the final season of Game of Thrones she can rest easy knowing that she has an accomplishment that very few have achieved — she has a worm named after her. During a recent expedition in the Pacific Ocean near the equator, researcher Paulo Bonifácio and his colleague Lénaïck Menot discovered new deep-sea worms at depths between 13,000 and 16,000 feet. Of the 17 new species and four new genuses of sea-worms, they named one “Abyssara,” which is a combination of the Latin word for “bottomless,” abyssus, and Arya, for Arya Stark. They also named another worm the “Hodor hodor,” a sea-worm with no eyes, serrated jaws, and a body made up of 24 segments. So Arya has got that going for her, which is nice.

To get an idea at where Arya is going in Season 8, let’s look back at all of the adventures and assassinations Arya had in Season 7.