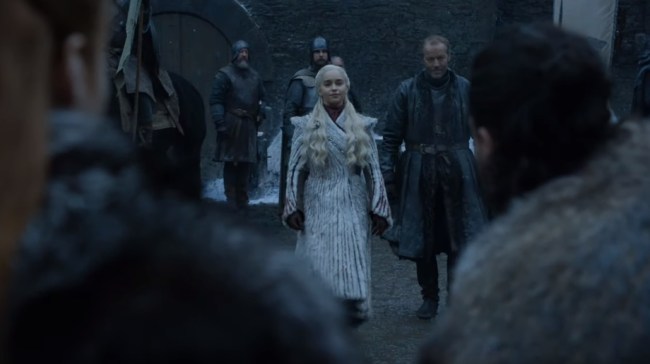 In the first look at the final season of Game of Thrones, Daenerys Targaryen has arrived at Winterfell and meets Sansa Stark. The two ice queens are colder than the Night King’s stare. The teaser is from HBO’s new promotion for their Spring TV shows including the third season of True Detective, Damon Lindelof’s adaptation of the comic book classic Watchmen, the final season of Veep, Bill Hader’s Barry, and Big Little Lies starring Merryl Streep.

One month ago we got to see a teaser trailer for the eighth and last season of Game of Thrones, but it didn’t have any actual footage from the hit HBO TV show. This trailer gives us our first glimpse into the world of Westeros that doesn’t have a wall to keep out the Night King and his Army of Dead, which are sure to make their way to Winterfell very soon.

Speaking of Winterfell, the House Stark no longer controls the capital of the North because Jon Snow has bent the knee to Daenerys. In the new sneak peek clip of Season 8, Sansa Stark has also bent the knee to the Queen of the Dragons. “Winterfell is yours, Your Grace,” Sansa tells Daenerys. Sansa doesn’t know that is her brother’s GF, as well as her aunt. Awkward. Oh look, Ser Jorah Mormont is back with his googly eyes set on Daenerys. He too doesn’t know that the apple of his eye has already rocked the boat with Jon Snow. More awkwardness. Brienne of Tarth has a watchful eye from behind during the meeting.

The TV adaption of George R.R. Martin’s A Song of Ice and Fire series looks to come to an epic conclusion with only six hour-long or more episodes left in the TV show. The teaser trailer was shown during the Golden Globes. Game of Thrones returns in April.