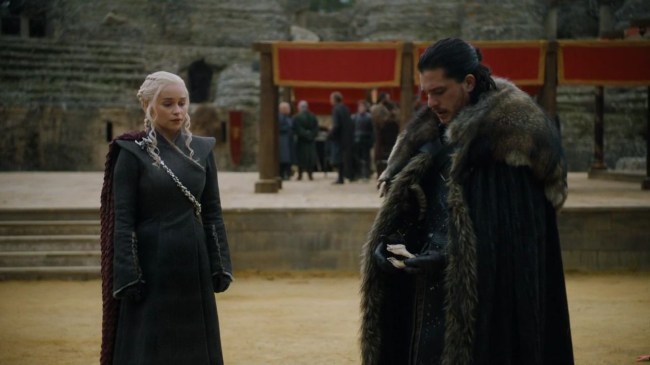 It’s been 479 days since the most recent episode of Game of Thrones and about the same amount of time since fans have been speculating how the events of the show’s final season will unfold when it airs in April.

For a while, people who read the books could feel superior to the show’s viewers, but thanks to George R.R. Martin’s laziness, they’re now in the dark as much as everyone else when it comes to how things are going to play out.

HBO has gone to great lengths to prevent any leaks concerning the final season of Game of Thrones so fans have largely been forced to jump to conclusions based on tiny details in the show and cryptic hints dropped in various interviews (like my recent chat with Hafþór Björnsson).

So far, members of the cast have painted a pretty dire picture concerning the fate of the show’s characters.

Peter Dinklage says things don’t look so hot for Tyrion and Sophie Turner claims the upcoming season will have more deaths than any that came before it, implying the ending might be a disappointment to some fans.

It isn’t just viewers of the show who’ve been obsessing over comments like these. Oddsmakers have been keeping a close eye on the flow of information, and last month, OddsShark claimed Bran Stark was the favorite to win it all.

However, it appears the tide is shifting based on an updated set of odds that say Jon Snow is now the leading contender to win the game for the throne.

Daenerys also saw her stock rise a bit and Jamie dropped down from +4000 but is still a comparative longshot.

He might not be listed on the board but I’m still pulling for Hot Pie.