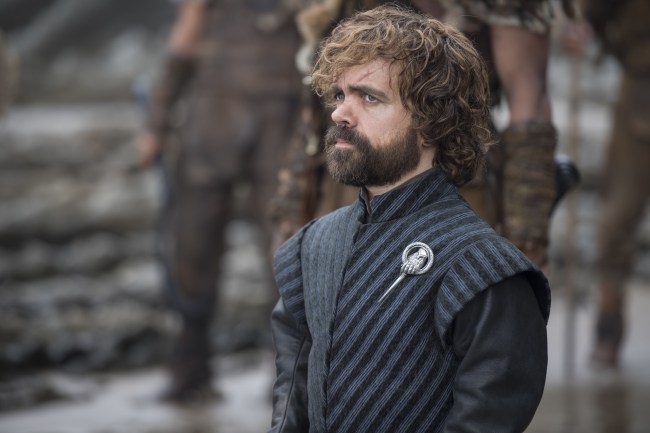 The forthcoming season of HBO’s Game of Thrones will wrap the series up in six long episodes and Peter Dinklage, the actor who plays Tyrion Lannister, recently spoke about the potential fate of his character

The 8th season will have to bring the literal and metaphorical Game of Thrones to a close and that means some of the key players and main characters will die. It also means that some of the characters might actually see all of their wildest dreams come true.

We really don’t know where the show’s headed because HBO’s showrunners have done an impeccable job at preventing Season 8 spoilers by introducing multiple scripts to confuse crew members, writing multiple ends, and they even built a secret weapon that could shoot down drones snooping on the show while filming.

There are *POTENTIAL SPOILERS* ahead for anyone who’s not caught up through all seven seasons. So if you don’t want to read about Peter Dinklage’s latest interview and his comments about Tyrion Lannister’s fate then you can check out all the Game of Thrones content in the BroBible archives and leave this article now….Still here? Let’s move on.

In a recent interview with David Marchese of Vulture, Peter Dinklage was asked about his feelings on Tyrion’s ending with the show and he hints at death here even though he stops of coming out and saying anything definitive. He was also asked to discuss Tyrion’s character arc over the years and how he feels about that. Here’s what he had to say:

Vulture: But to go back to the character question: Now that your work with Tyrion is done, what’s your perspective on his trajectory?

Peter Dinklage: He certainly developed a deeper sense of responsibility over the course of the show. He was a pretty irresponsible character to begin with. He used his position as the outcast of his family like an adolescent would. He pushed it in their [the Lannisters’] faces. The beauty of Tyrion is that he grew out of that mode in a couple of seasons and developed a strong sense of responsibility. Not morality, because he always had that, but what to do with his intelligence.

Vulture: Without giving anything away, how did you feel about where Tyrion is left at the end of the series?

Peter Dinklage: I feel very, very — I’m trying to find the right word. I think he was given a very good conclusion. No matter what that is — death can be a great way out I took what Dinklage was saying here not as a suggestion that Tyrion dies, but rather his attempt to leave open the possibility that the character might meet that fate. (via)

Will anyone be shocked if Tyrion Lannister gets killed off on the 8th and final season of HBO’s Game of Thrones? Absolutely not. It wasn’t too long ago that George RR Martin opened up about why he kills off everyone’s favorite characters and Tyrion is definitely a fan favorite.

I will be shocked if they kill off Tyrion in the first two episodes of the season. He’s definitely a strong character that’s great for the show and I’d love to see him there for all six episodes but I won’t be at all surprised if they kill him off.

You can check out Peter Dinklage’s FULL INTERVIEW on Vulture by following that link!