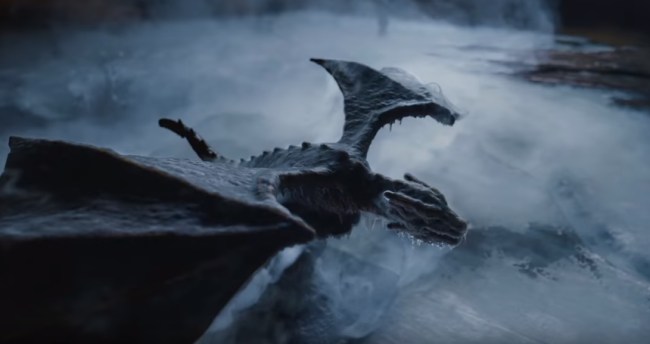 HERE WE GO! This is our first official glimpse at the final season of Game of Thrones. We’re still months away from the eighth and last season of Game of Thrones, but today we get a peek at what’s to come. The teaser trailer hints at an epic battle of ice and fire. Which shouldn’t be so surprising for a TV show based on the George R.R. Martin book titled A Song of Ice and Fire.

The teaser trailer looks a lot like the opening title sequence of Game of Thrones, but this time Westeros is not growing cities and kingdoms but rather powerful houses and empires are being ravaged by ice in the north and fire in the south only to meet in the middle for what will absolutely be an epic final six episodes.

There is not any actual footage, but it will be fun to overanalyze the hell out of this trailer and guess what every sequence means even when it probably won’t mean very much. Why does the wolf, sigil of the Starks, get frozen to death by the ominous front of frost? Why dies the dragon get consumed by frost? Is it Drogon? The Lannister lion is the next sigil to becomes an ice pop.

The teaser trailer titled “Dragonstone” dropped at the end of a panel at the Comic Con Experience (CCXP) in Brazil, which starred Maisie Williams AKA Arya Stark, John Bradley AKA Samwell Tarley as well as showrunners David Benioff and Dan Weiss.

The trailer confirms that the final season will begin in “April 2019.” ONLY FOUR MORE MONTHS!!!