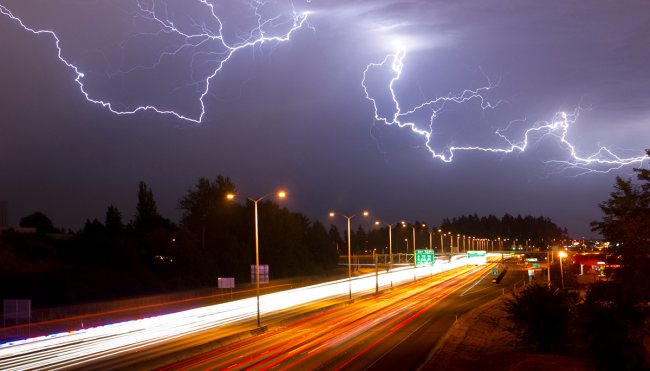 The second movie in the Final Destination franchise didn’t really go down in history as a cinematic classic, but it’s permanently ingrained in the memory of every single person that has a Pavlovian urge to change lanes whenever they find themselves driving behind a truck hauling logs on a highway.

Sure, it might like a paranoid response, and while I can’t find any data to confirm this hunch, I’m willing to bet more people have been killed by things flying off the back of a tractor-trailer than those who’ve died as a result of trying to avoid that fate by erring on the side of caution.

However, there’s only so much you can do when it comes to making sure large objects don’t make their way through your windshield at incredibly high speeds—a lesson that two people in Florida recently learned the hard way courtesy of Mother Nature.

According to CNN, two unidentified occupants of a pickup truck making its way down I-10 in Florida on Monday were lucky to walk away alive from a terrifying accident after a bolt of lightning apparently dislodged a chunk of pavement from the highway and sent it hurtling through the vehicle’s front and back windows.

Officials from Walton County Fire Rescue were dispatched from the scene and snapped some photos after the occupants were transported to the hospital with non-life-threatening injuries, which is pretty amazing when you take a look at the extent of the damage.

Lightning struck I-10 in the FL Panhandle this morning, causing a chunk of the road to fly through the windshield of this truck.

Both occupants of the vehicle were transported with injuries. Via Walton County Fire Rescue pic.twitter.com/ALTwkvtrVe

I wish the driver and the passenger a quick recovery and would strongly advise them to avoid sticking their hand in a garbage disposal for the foreseeable future.