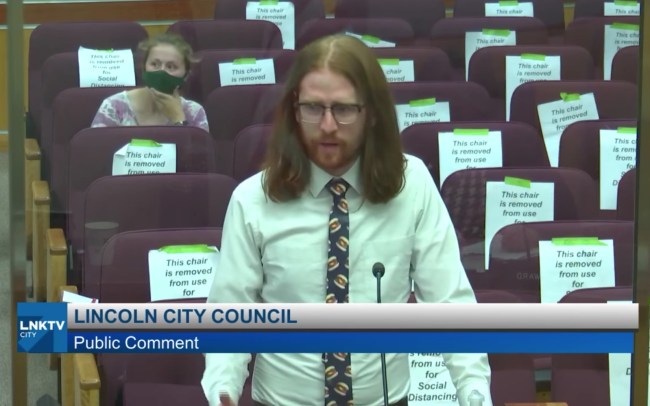 It’s in our darkest moments when we need heroes the most. With the onslaught of misery that 2020 has thrown our way we can all really use a hero in this moment and that’s exactly what we’ve got with Andrew Christensen, a Lincoln, Nebraska resident who has the chance to save humanity as we know it by uniting us around the most important issue of time.

I’m talking, of course, about renaming ‘Boneless Chicken Wings‘. Andrew Christensen went before the Lincoln City Council and delivered his inspired and passionate plea to ditch this name forever. Boneless Wings ARE NOT wings. This is a fact. They’re not even Chicken Tenders or Nuggets because they’re trying too hard. They’re an abomination and they confuse our children who are falsely led to believe these chicken clumps are members of the wing family.

He appeared before the City Council on Monday and delivered the best speech you’ll see in 2020. Professional orators and politicians have nothing on this man’s poise at the podium. He’s the hero we need right now and if we rally behind him it’s possible that we can rid the world of ‘Boneless Chicken Wings‘ forever. The BREAST IS NOT THE WING and we would shut down a butcher in an instant for mislabeling meat!

Here’s the truly inspiring 2-minute clip of his speech in front of the Lincoln City Council and I’ve included the text of his speech below the video from Matt Novak.

You 100% need to watch the video, but here’s the text of his speech as well so you can copy/paste it onto Twitter or Facebook as you share this article far and wide so everyone on the planet can see it and we can rid ourselves of the name ‘Boneless Chicken Wings’ forever. There’s also a 2+ hour video from the City’s dedicated YouTube page if you want to see what else is going on Lincoln, Nebraska.

“Lincoln has the opportunity to be a social leader in this country. We have been casually ignoring a problem that has gotten so out of control that our children are throwing around names and words, without understanding their true meaning, and treating things as though they’re normal,”

“I go into nice family restaurants and see people throwing this name around and pretending as though everything is just fine. I’m talking about boneless chicken wings,” “I propose that we as a city…” “Excuse me, I’m trying to… excuse me, c’mon,” “I propose that we as a city remove the name boneless wings from our menus and from our hearts. These are our reasons why: Number one, nothing about boneless chicken wings actually come from the wing of a chicken. We would be disgusted if a butcher was mislabeling their cuts of meats, but then we go around pretending as though the breast of a chicken is its wing?”

“Number two, boneless chicken wings are just chicken tenders, which are already boneless,” “I don’t go to order boneless tacos. I don’t go and order boneless club sandwiches. I don’t ask for boneless auto repair. It’s just what’s expected.” “Number three, we need to raise our children better. Our children are being raised to be afraid of having bones attached to their meat. That’s where meat comes from, it grows on bones. We need to teach them that the wing of a chicken is from a chicken, and it’s delicious,”

Major props to Matt Novak at Gizmodo for finding this clip and sharing it with the world because this is easily the catalyst we all need to come together in these trying times. Breast meat is NOT the wing. We must stop lying to our children and confusing the elderly. Enough is enough.

You can do your part in ending the name ‘Boneless Chicken Wings’ forever. Share this article with everyone you know. Plaster it on the Facebook Pages of restaurants who have these items on their menus. Get active. Fight the good fight. Do your part in changing the world.